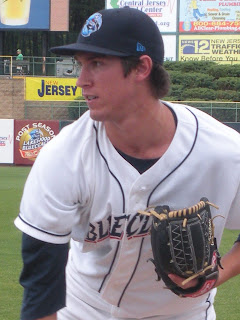 Right-handed pitcher Jonathan Pettibone, a third round selection in the 2008 amateur draft, was among the excellent starting rotation with Class A Advanced Clearwater that became known as "The Baby Aces" last season. As he has taken strides to improve his skills, Pettibone has begun to earn an increased amount of recognition in the Philadelphia developmental ranks.

The 6-foot-5-inch 200-pound Pettibone made his pro debut with the Gulf Coast League Phillies in 2008, recording an inning of work. The following season, the Esperanza High School (California) product joined the starting rotation for the Williamsport Crosscutters of the short-season New York-Penn League. In 9 games, Pettibone went 2-4 with a lackluster 5.35 ERA and a .261 batting average against. He was then sidelined with an injury and missed time in the latter portion of the season.

In 2010, Pettibone improved his velocity and effectiveness by working closely with pitching coach Steve Schrenk to adjust his mechanics and extension. Pettibone's results on the mound became increasingly solid as his remarkable campaign progressed. After posting a 5.04 ERA in 12 games through the end of June, Pettibone served up a 2.37 ERA over his final 12 appearances of the regular season with Class A Lakewood. That terrific performance down the stretch helped the club win its second straight South Atlantic League championship. Overall, Pettibone recorded an 8-6 record and finished among the league leaders in ERA with a 3.49 mark.

As a member of the Threshers staff, in 2011, Pettibone sported the 5th best ERA in the Florida State League at 2.96 and also recorded a 10-11 record with a .248 batting average against in a league leading 161 innings pitched.

Pettibone signed with Philadelphia in 2008 after committing to the University of Southern California on a baseball scholarship. The son of former Twins pitcher Jay Pettibone states that his dad was an influence on him, during his youth, but dad backed off and let the younger Pettibone learn from his coaches and on his own once he reached high school playing age.

The 21-year-old is an aggressive hurler who steadily focuses on attacking the strike zone, pitching to contact, and trusts his defense to get outs behind him. Pettibone does not rack up hefty strike out numbers (5.76 K/9 in 2010 and 6.43 K/9 in 2011), but he gets batters out and that is what counts most.

Pettibone, who grew up as an Angels fans idolizing innings eater John Lackey, is very durable and is described by coaches as still having gas left in the tank at the end of his outings. His pitch repertoire consists of a mid-90's four-seam fastball, a strong change up and an improving curve ball.

The Phillies feel Pettibone's future is as a starter. Look for this rising star to begin the 2012 season with Double-A Reading, where he should continue his ascent toward the higher levels as a key contributor to their pitching rotation.