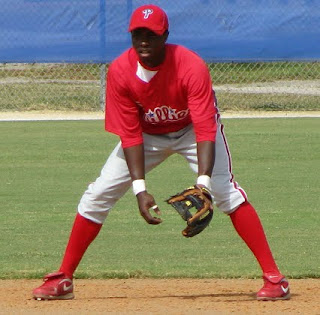 Recently I had the opportunity to speak with the Phillies' 2nd round selection from the 2011 draft, shortstop Roman Quinn. The 18-year-old signed late and did not play in any official professional games last year, but did participate in work outs with the Gulf Coast League Phillies and spent time in the Florida Instructional League.

Roman is a 5-foot-10-inch tall 170-pound switch-hitting shortstop that is highly praised for his speed and his adaptability. The exciting young talent is primed for a big year, potentially with the Class A short-season Williamsport Crosscutters.

I asked Roman about various topics including his friendship with 1st round draft pick Larry Greene Jr., his off-season thus far and plenty more. Check out the full interview below.


You didn't play an official game after signing with the Phillies in 2011, but you spent time around the GCL club. What was that experience like and how was it beneficial to you?

I think it benefited me by seeing how fast the game was and meeting most of the coordinators and some of the players.


You seemed to be paired up with Larry Greene during that time. Did you guys bond a lot during that stint?

Yeah, me and Larry became real good friends. We learned a lot about each other while we were in Clearwater.


How would you scout yourself as a player? What are your strengths?

I'm very athletic, plus-plus speed, great arm, I have gap power from both sides, and I can play more than one position. All those things aside, I'm young and still have a lot to learn about this game.


What have you been doing this off-season to prepare for your first year as a pro?

I been working on pretty much everything. Switch hitting is still kind of new to me but I'm getting a lot of reps on that side, so I'm starting to feel like a natural lefty, of course bunting on both sides because that is a big part of my game, taking a lot of ground balls at shortstop and working on my fielding technique, speed drills, and working out in the weight room.


I know you made some extra income this off-season, by signing insert cards
for a trading card company. What details can you share about that experience? Were those the first autographs you signed?

The name of the company was Panini and I signed, like, a thousand stickers for them (to be applied to their products) and got something in return. Yes, it was my first autograph signing for an actual company.


Your twitter handle is @baseballswag4. Does that handle speak on your confidence level?

Yeah, it pretty much speaks on my confidence and my girlfriend said I need to add a little bit of style to my Twitter name. So there it is.


What has surprised you the most about being a professional ball player?

Knowing that I have people that are willing to help me get to the big show and achieve my goals.


And one last thing...what is your favorite spot to eat at in Clearwater?

My favorite place to eat in Clearwater is Smokey Bones.