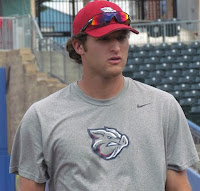 Righty hurler Michael Schwimer had another great minor league season in 2011 and earned a spot on the big league roster. With nothing left to prove in the developmental ranks, Schwimer will get a considerable look in spring training with the Phillies this year.

Selected in the 14th round of the 2008 draft, Schwimer signed quickly and made his pro debut with short-season Williamsport, posting a 1.96 ERA in 22 relief outings. A year later, Schwimer skipped Class A Lakewood and began his 2009 season at Class A Advanced Clearwater, where he went 2-1 with 20 saves and a 2.85 ERA in 48 games. He earned a promotion to Reading, of the Double A Eastern League, by season's end.

The Virginia native, who will turn 26-years-old next week, began the 2010 season back with Reading where he posted a 5-3 record with 11 saves, a 3.60 ERA and a .225 batting average against in 32 appearances. After a July promotion to Triple-A Lehigh Valley, Schwimer continued posting remarkable numbers, going 2-2 with a 1.35 ERA with a .213 batting average against.

Schwimer had another excellent season in 2011, eventually earning a spot on the big league roster in August. En route to becoming an All-Star with the IronPigs last year, the 6-foot-8-inch 240-pounder dominated the International League, going 9-1 with 10 saves, a 1.85 ERA and a .203 batting average against in 47 relief appearances.

After his promotion to Philadelphia, the University of Virginia product looked respectable, but struggled considerably at home. In 5 games at Citizens Bank Park, Schwimer sported a 10.80 ERA. Conversely, on the road, Schwimer was strong, holding down a 1.93 ERA in 7 games.

Schwimer is a talented reliever with a firm focus on the mental side of the game. He anticipates what the thought process of the opposing batter might be in each at bat, and for each scenario, and is able to stay a step ahead far more often than not.

With a repertoire that includes a fastball that ranges from 92-94 MPH, a plus slider and a solid change up, Schwimer stands to be a pitcher the Phillies will count on in 2012 when openings in the bullpen arise due to injuries or other reasons.