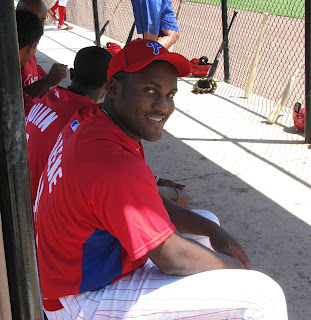 The Phillies' top draft pick from 2011, Larry Greene Jr., has the type of power that already has many within the organization and around baseball buzzing. After inking his first professional contract close to the signing deadline last year, Greene Jr. has yet to play in his first organized professional contest. The power hitting outfielder from Berrien County High School in Georgia is expected to make his pro debut in just a few short months.

Greene Jr., who got a $1 million signing bonus, worked out with the Gulf Coast League Phillies late in the season last year and spent some time at the Florida Instructional League as well. Despite sitting out with a groin injury, the lefty batting slugger was able to take in plenty of batting practice and put himself on display for the brass in attendance to see many of their newly drafted prospects.

Already, Greene Jr. has begun to impress and has proven himself worthy of the buzz that led to him becoming the 39th overall selection in last year's draft. According to Phillies general manager Ruben Amaro Jr., who got a close up view of the slugger at Instructs, Greene Jr. has the type of raw power that is difficult to find. Additionally, new Class A Lakewood BlueClaws manager Mickey Morandini got to see the 6-feet tall 235-pounder take batting practice at the FIL and was quite impressed with his strength at the plate.

Some baseball heads project Greene Jr. as a first baseman, but that isn't a change the Phillies are convinced is necessary yet. Evaluations of his defensive skills, as far as the Phils are concerned, have Greene Jr. holding court in the outfield for the time being.

Expect Greene Jr., who turns 19-years-old this week, to begin the 2012 season in extended spring training. He should get some playing time with the short-season Williamsport Crosscutters or Class-A Lakewood as well.