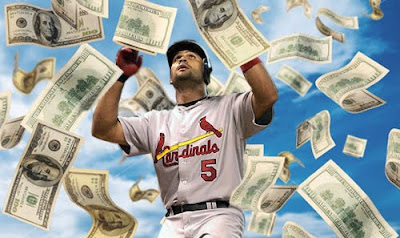 The St. Louis Post-Dispatch reported on Thursday that one fan decided to prove a point to his favorite team's departed star.

When news landed that free agent Albert Pujols was leaving the Cardinals to sign a 10-year $254 million contract with the Angels, Paul Russo, who owns a St. Louis based sports apparel chain, decided to give away all remaining merchandise that bared the baseball star's name.

According to the article, Russo had recently discontinued ordering Pujols gear, due to the former league most valuable player's uncertainty to return to the club that he helped win the World Series this year.

Albert Pujols apparel flew off the shelves this morning at the four area Pro Image Sports stores, but only because it was free.

Paul Russo, who owns the St. Louis area franchises, said at about 1:30 p.m. that the Chesterfield Mall store had just about given away its entire stock of about 150 shirts and jerseys that would usually sell for between $14.99 and $129.99. Other area locations gave away a similar amount of Pujols apparel, he said.

The decision by Russo to give the items away, instead of slashing prices and earning a small return for his inventory, was a spur of the moment one, but not a difficult one. As Russo explained, it was to make a point. "It's not about the money, just like Albert said. Except he lied, and we didn't," he stated.