By Jay Floyd December 01, 2011
Every so often through the off-season, we'll take a look at Phillies players throughout the various winter leagues. So, the time has come, once again, to review familiar talent in Caribbean leagues. Check out the information that lies ahead. 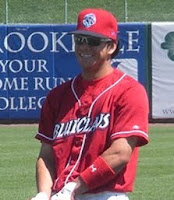 Catcher Sebastian Valle (pictured) has posted a batting average of .210 through 20 games with his hometown Caneros de los Mochis in Mexico. The 21-year-old has 3 HR and 9 RBI as well. Valle, a righty batter, is the Phillies' top non-pitching prospect. Valle has been playing left field, to avoid adding innings, crouching behind the plate, to his knees. In 91 games with the Class A Advanced Clearwater Threshers during the 2011 season, Valle batted .284 with 5 HR and 40 RBI en route to earning a nod as a full season All-Star in the Florida State League.

Right-handed hurler Julio Rodriguez has made two relief appearances for the Gigantes de Carolina in the Puerto Rican Winter League. Having not appeared in a game since November 6th, the 21-year-old Rodriguez stands with no decisions and a 6.00 ERA. The 6-foot-4-inch 200-pounder had an outstanding regular season for the Class A Advanced Clearwater Threshers in 2011, going 16-7 with a 2.76 ERA and a .186 batting average against in 27 starts.

Shortstop Freddy Galvis has begun to pick up the pace lately, recording 7 hits in his past 3 games, raising his batting average from .204 to .248 through 31 games for the Aguilas del Zulia in the Venezuelan league. Galvis also has 5 doubles, 3 triples and 14 RBI for the Aguilas. Early reports stated that the 22-year-old would likely complete his winter league assignment by early December, however it is unclear at this time how much more action Galvis, who played on Wednesday, could see in his native Venezuela this off-season.

Righty pitcher Jesus Pirela, a 22-year-old native Venezuelan, is a teammate of Galvis. In 5 relief outings with the Aquilas, Pirela has tallied a 21.21 ERA with a 0-1 record and a .500 opponents batting average. In 17 games with the short-season Williamsport Crosscutters in 2011, Pirela went 3-0 with a 4.34 ERA and 31 strike outs in 29 innings.

Second baseman Cesar Hernandez has posted a .258 batting average through 30 games (not counting action on Wednesday) with the Bravos de Margarita in Venezuela. The switch-hitting 21-year-old has just one extra base hit to claim, a double. Hernandez posted a .268/.306/.333 line in 119 games with the High A level Clearwater Threshers during the 2011 regular season. Hernandez, signed as a free agent in 2006 at age 16, is a well regarded defender on the fast track upward in the Phils' developmental ranks.
Infielder Carlos Rivero is batting .235 with 7 doubles, a triple, a HR and 11 RBI through 31 games with the Leones del Caracas in Venezuela. The 23-year-old was claimed by the Phillies last off-season from Cleveland. The Venezuelan born Rivero had a solid 2011 regular season, posting a .270 average with 16 homeruns and 71 RBI in 136 combined games for Double-A Reading and Triple-A Lehigh Valley.
Lefty pitcher Ervis Manzanillo has made one scoreless relief appearance for the Navegantes del Magallanes in Venezuela. Manzanillo remains inactive since October 13th. During the 2011 regular season, the 20-year-old Manzanillo had some ups and downs with the Class A Lakewood BlueClaws, posting an 8-7 record with a 5.02 ERA and a .257 batting average against in 26 games (25 starts).
Reliever Justin Friend, a Rule 5 draft pick of the Phillies last off-season, has appeared in 11 games for the Tiburones de La Guaira in Venezuela. The 25-year-old sports a 2-0 record with 3 saves and a 3.75 ERA. In 55 combined games with Class A Advanced Clearwater and Double-A Reading during the 2011 regular season, Friend went 3-7 with 28 saves and a 2.75 ERA while striking out 61 and walking 16 batters in 59 innings.
Wilson Valdez, playing with the Gigantes del Cibao in the Domican Republic, has posted a weak .211/.247/.329 line in 20 games. The 33-year-old infielder batted .249 in 99 games with the big league Phillies in 2011.
Lefty reliever Juan Perez has looked great in the Dominican Winter League with the Gigantes del Cibao. Through 18 games Perez has a 0-1 record with a save and a 0.84 ERA. In 21 1/3 innings, the 33-year-old has produced a .110 batting average against. The veteran reliever appeared in 8 games at the big league level with the Phillies in 2011 and went 1-0 with a 3.60 ERA, but is currently a free agent.
Utility man Michael Martinez has continued his awful effort with the Estrellas del Oriente in the Dominican league. Through 14 games, Martinez has posted a .096 batting average. The 29-year-old has been playing shortstop for the Estrellas. Martinez batted .196 in 88 games with the Phillies in his first MLB season in 2011.

Another free agent, outfielder Rich Thompson, has posted a .265 average with a double and a homerun in 9 games with the Estrellas de Oriente in the Dominican League. Thompson was a key contributor throughout the 2011 season with the Triple-A Lehigh Valley IronPigs as he produced a .276 average with 5 HR, 30 RBI and 48 stolen bases in 124 games.