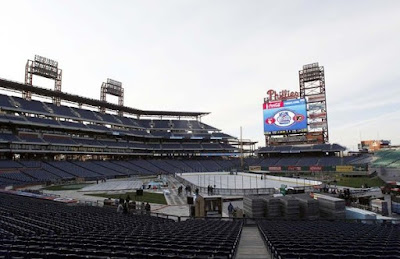 The annual NHL Winter Classic is set to be played on Monday, January 2nd and will pit the Philadelphia Flyers against the New York Rangers.


Amaro: "It's pretty cool. It's been pretty neat watching the development, the things that are happening. … I've been watching every single day we walk in. I take a route in through the concourse and check out the progress. It's been neat to watch."

"I'm born and raised here, a big Flyers fan. I was here when the Broad Street Bullies were big-time. I think I was 9 or 10 years old when they were winning. And it's exciting. I've always been a big Flyers fan and a big Paul Holmgren fan. I really love their organization. They've got great people, had a ton of success. Probably been one of most successful franchises we've had here in this city. It's neat to be able to merge the two in some way, shape or form."


Montgomery: "It's probably something we hadn't thought much about until last January when Peter (Luukko, Flyers President) reached out and said it was a possibility. It's an exciting time for us. We're very proud of the facility and we're pleased that after a couple of those venerable places like Wrigley (Field, in Chicago) and Fenway (Park, in Boston) that we're going to be the third baseball facility to host a Winter Classic."


Rollins: "It's nice to see for the fans. For them to be treated to an outdoor game, the way hockey was probably when they were kids growing up playing, just having these unpredictable conditions. Maybe there'll be snowfall that day. It'll be pretty fun."