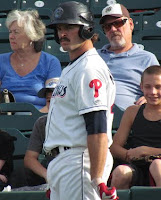 Throughout the autumn and winter months, we'll check in with various Phillies minor league players and inquire about how they try to maintain their baseball acumen during the long, drawn-out off-season. This latest installment features the most popular player in Lakewood BlueClaws history Jim Murphy.

A 17th round draft selection by the Phillies in 2008, the Washington state native Murphy has played as high as Class A Advanced Clearwater and has posted a .265 with 47 homeruns and 217 RBI in 420 regular season games during his four years as a professional.

The slugging first baseman injured his left hand in the final week of the regular season and has been rehabbing the injury following surgery. I spoke with Jim about his recovery, his training, helping out with local youth clinics and more. Read ahead to see what he had to say.

I just wanted to check and see how the off-season has been going for you. How has recovery been and how are you staying in shape? Anything specific you like to do?

This off-season was a little different after my hand injury. I was in a splint for a month and then did rehab for a month after a broken hamate bone suffered on August 30th. I finished rehab on November 3rd and made a full recovery with no post-op injuries.

I like to do Cross-Fit for strength training because it is so functional with Olympic lifts for strength. It has a combination that I haven't found anywhere else. I couple that with both distance and sprint workouts to get ready for Spring.

I know you took part in some clinics in Lakewood recently, where you got to work with children on their baseball skills. Do you think coaching is in your future and do the clinics help you prepare for that?

I don't know exactly what my future will hold but I would like to stay in the game in some capacity (after my playing days are over) whether it is coaching or some other type of office position. The clinics are a great way to stay involved in the game and start to learn how to communicate your knowledge of baseball to others.

I know we've talked before about your high level of popularity in Lakewood, based on the big money your game-worn jerseys always draw from the charity auctions and the loyal fan followings, but how much do you genuinely feel that level of love from the fans there and has NJ really become like a true second home for you because of that?