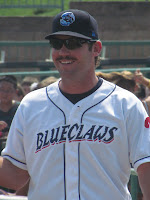 Earlier this year, former Phillies minor league third baseman Travis "Moose" Mattair made time to take fans along on his return to baseball, after a year off, by checking in with PhoulBallz.com and PhilliesNation.com, giving the fan base an in depth and unique glance into life as a prospect heading to and participating in spring training, occasionally at the big league level. On Thursday, Moose, a native of Washington state, was selected by the Cincinnati Reds in the minor league portion of baseball's Rule 5 draft.

As fans might expect, the slick fielding Mattair checked in, to offer his thoughts on that news, for what may possibly be the final edition of his recurring diary feature called Moose Tracks.


I am really excited and really ready to start a new chapter in my baseball career! This is something I didn't expect and now that I know (about it), I'm very happy.

My parents are probably more excited than I am, now that, with Cincinnati, I'll spend spring training in Arizona, which is much closer to them in the northwest than having to go clear across the country to Florida to see me play.

I first learned about being picked from Jiwan James (another Phillies prospect, who was rumored to be a likely target of teams in the Rule 5 draft, but went unselected). He texted me with "Dang, Moose," saying something about getting picked in the Rule 5 draft and going to Cincinnati. I replied back with, "Congratulations!" I was clearly confused, as I thought it was Jiwan that was taken. He replied to set me straight and that's how I found out that the Reds took me.

I spent a lot of time talking on the phone with people, and saying some good byes. I talked at length with Marti Wolever, who is the Phillies' scouting director and I thanked him for the opportunity to play in the organization. I talked with my agents, who are at the winter meetings, but weren't really at the Rule 5 proceedings.

This is just a new chapter for me and I am very excited for what is next.


There is no doubt that we all wish Moose the best as he continues to live his dream of playing professional baseball. He is one of the kindest and most respectful individuals I have had the pleasure of dealing with in baseball and in life in general.

LeeAnn said…
Congrats to you Moose--well deserved although we will miss you we sure will be cheering you on! Brian, LeeAnn, Sami and Jake <3
December 9, 2011 at 11:15 AM