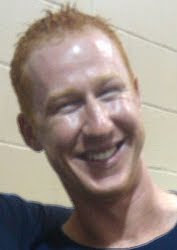 Throughout the autumn and winter months, we'll check in with various Phillies prospects and inquire about how they try to maintain their baseball acumen during the long, drawn-out off-season. This installment features outfielder Brian Gump, who was a 26th round draft selection in the 2009 draft.

Gump, a lefty hitting 24-year-old California native, has posted a .239 batting average with 9 homeruns and 52 RBI in 178 games during his 3 seasons in the Philadelphia developmental ranks.

Recently, I got in touch with Brian, who has played all three outfield positions during his professional career, to inquire about how he trains during the off-season. Read ahead to check out some good insight from the UC Santa Barbara graduate.

What is your training regimen like during the fall and winter months?

Well, I try and tweak my off-season training a little bit every year. This year, I grew a mustache and it seems to be working quite well.

Seriously though, I recently saw a quote, by Bill Clinton of all people, that sums up the way I approach my training. "The price of doing the same old thing is far higher than the price of change".

I try and constantly evolve and tweak what I am doing. This year I have started training with a few of my college teammates that are doing very well with the Rockies right now. They invited me out to do what we call "sand training". After I almost threw up several times on my first day, I knew it was for me. Basically, we run 3 days a week, on sand, with our trainer who sets up different exercises like pulling a 50-pound sled through the sand, running short agility's, various jumps and sprints with weight vests on. It's intense, both physically and mentally. The sand is great because it is so low impact so it really limits the wear and tear on my body, while giving me great resistance at the same time.

On top of the sand training, I lift 4 times a week. This year I decided to not worry as much about putting on body weight and have decided to shift my focus to really building a lot of strength. Years past, I was obviously weight training, but I feel like I had plateaued and was just training to be in great condition and not as much to be stronger than the year before.


How much time do you take off from hitting? Anything new added to the plan this year versus other years?

I don't like to take too much time off from hitting for several reasons, but mostly because I genuinely enjoy hitting and want to work on one thing or another. This might be counter productive, but it's who I am and it's tough to fight it. I think I started hitting very casually, like 1 or 2 times a week, around the start of November. Now we are getting to the time where the hitting and throwing start to slowly ramp up in frequency.

I have made a few small changes, hitting wise. Hendu (roving hitting instructor Steve Henderson) and I had been working for a good part of the year on getting me to finish lower to help me stay through the ball. I had trouble staying consistent with it, but when I was doing a good job with it, things were great and when I wasn't, it showed too. So I have been working hard at getting really consistent with that lower finish, because I got a glimpse of what it can do for me at the plate when I do.

Also, I have tried tweaking my grip and moving the bat into my fingers and relaxing my hands more. Its amazing the difference something so small like that can make in your bat speed and swing.

Anonymous said…
The nominations for the 69th Annual Bright Globes are here, and we can exclusive adopt this year's uppermost honoree is at a thorough damage after words. The Artist, the unspeaking movie that fortified at Cannes first doing the unaltered at the Toronto Foreign Peel Festival earlier this year, earned six nods Thursday morning - including Wealthiest Travel Picture (Harmonious or Comedy) and acting honours for leads Jean Dujardin and Berenice Bejo. Holly-wood dramas The Descendants, star-ring George Clooney, and The Stop, starring Emma Stone, were both recognized with five nods apiece. Those two films will disguise below par in the best-drama head against Hugo, The Ides of Walk, Moneyball and War Horse - all films that are represented away in the nominations. As for The Artist's contention in the category of pre-eminent comedy or harmonious, it will compete against 50/50, Holocaust, Midnight in Paris, My Week With Marilyn and Bridesmaids. (Admitting that a hit at the thwack office, Bridesmaids only scored equal additional nomination, an acting drop off on account of be ahead of Kristen Wiig.)

Anonymous said…
Hahah, My laptop crashed when I was browsing www.phoulballz.com last time I was here. And for the past 2 months I have been looking for this weblog, so thankful I located it once again! :D
June 12, 2012 at 6:30 PM