Lakewood's Buchanan Shining in the SAL 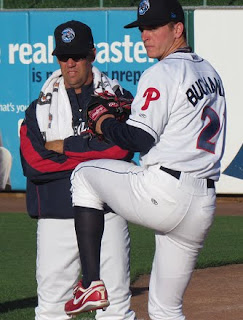 Lakewood starting pitcher David Buchanan is off to a tremendous start in the 2011 season. Through 9 starts, the right-hander has prevailed as the premiere hurler on the Phillies Class A BlueClaws staff.

Buchanan, a 7th round draft pick of the Phillies in last year's amateur draft, has used his fastball, his slider and his sinker to dominate South Atlantic League batters. Following his victory against the West Virginia Power on Sunday, Buchanan leads the league in ERA (2.21) and innings pitched (57) and is tied for the league lead in wins (6).

Earlier this month, Buchanan threw a complete game and got the win against the Yankees affiliate Charleston RiverDogs. It was the BlueClaws' first 9 inning complete game since 2007, when Carlos Monasterios achieved the feat.

The 6-foot-3-inch, 190-pound Buchanan is humble and credits the team and coaches behind him for helping him achieve early success in his first full season of professional baseball.

"I've got great guys behind me," Buchanan stated. "I'm a ground ball pitcher and after I pitch, you don't see too many errors on the board, if any, and that says a lot about the defense. I just go out there and do my job and trust them to make the plays and we win as a team."

"Every game I've gone out there, I've just had the same approach, and that's to get strike one and take things pitch by pitch," Buchanan added. "That technique is straight from my pitching coach Steve Schrenk. Where I get hurt is when I start to overanalyze things. If, at times, I start to worry about previous innings or a missed pitch, I know I have to gather myself and say, 'Don't worry about that kind of stuff'. So, Schrenk really helps me to slow the game down and keep it simple."

The Peachtree City, GA native, Buchanan, was previously drafted in 2009 by the New York Mets, but chose not to sign. Instead, he transferred from Chipola Junior College in Florida to Georgia State University where he became that school's highest drafted player ever.

During the MLB draft last June, Buchanan was monitoring the proceedings online with his dad, a friend and other family members. Unfortunately for the excited crowd, David's internet service froze just as the Phillies' 7th round pick came up. The folks in attendance at the Buchanan residence missed his selection on the live webcast.

"I got drafted, so it was going to be great no matter what happened," Buchanan said. "But, my computer froze up, so I actually missed my name being called. But, soon after, I got a call (from the Phillies) saying, 'Hey, congratulations. We drafted you.' So, in the end it was a great experience. The whole family was there to enjoy it."

The 22-year-old Buchanan grew up 10 minutes from Turner Field in Atlanta and was, of course, a Braves fan. However, after following the likes of Atlanta's highly regarded pitching rotation of the 1990's, Buchanan is now a fan of a new faction of top-notch hurlers...ones from a rival organization that drafted him.

"I was born and raised a Braves fan," Buchanan said. "And I always liked the four aces...Smoltz, Maddux, Glavine, Avery, those guys. These days, I like watching Tim Hudson. I kind of try to follow his approach to the game because he's a sinker ball and ground ball pitcher. I like watching Cole Hamels, because of his change up and I've always wanted to develop a good one. And, of course, who doesn't like watching Doc (Halladay)? That whole Phillies rotation is special."

And Buchanan hopes to one day be a part of that staff, to help shut down the team he grew up adoring. It remains to be seen if Buchanan's friends and family will make the full conversion right along with him, or if they'll be hoping for future broadcast freezes so they don't have to choose between their hometown kid and their hometown team.