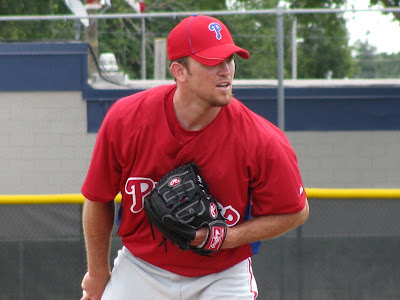 This afternoon, Phillies pitcher Brad Lidge appeared in an extended spring training game in Tampa against the Yankees club, as he rehabs his strained right rotator cuff. The former All-star reliever has been on the disabled list since spring training and has not appeared in a Major League game this year.

The 34-year-old right-hander made his extended spring debut with the Phillies club on Saturday, throwing 24 pitches, while allowing a hit and striking out one batter.

On Tuesday, Lidge recorded 5 outs in the same inning, as the rules in extended spring games can be altered a bit in order to accommodate the likes of rehabbing players. After walking the lead-off batter on 4 pitches, Lidge settled in, striking out the next 2 batters, forcing a pop up, striking out another and then wrapping up his game action with a fly out.

Following his efforts in his outing on Tuesday, Lidge told a source that he feels he'll be ready to pitch again after 2 days and that his next rehab appearance should be with the High A level Clearwater Threshers.

The expectation, at the point, is to have Lidge back with the big league club before the end of June. His velocity in the extended spring games has maxed out around 87 MPH, which is below his typical fastball velocity of 90-91 MPH that he reached toward the end of last season as well as shy of the 94 MPH he typically threw in his perfect 2008 season as the Phils' closer. 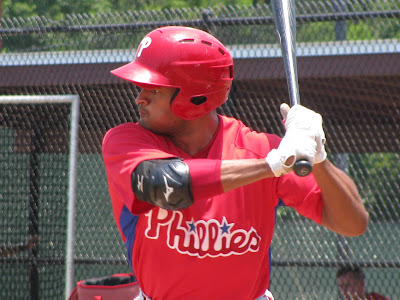 Also seeing action for the second time in Tuesday's extended spring training game was injured minor league outfielder Tyson Gillies. The 22-year-old Canadian was acquired in December 2009 from Seattle as part of the trio of players that came to Philadelphia in exchange for pitching ace Cliff Lee.

Assigned to the Double A Reading Phillies roster but on the disabled list all season with a left hamstring strain, Gillies missed time last season with the same ailment.

In the contest, Gillies showed some range by tracking down two fly balls on defense in centerfield and legged out two infield singles. Team manager Mickey Morandini removed Gillies in favor of a pinch runner after the second hit when Gillies stepped on the first baseman's foot, turning his own ankle somewhat. Gillies iced the ankle, walked without a limp and told a source he felt fine after his day was over.

In other minor league injury rehab news, Shane Victorino is set to begin a 2-game stint with Reading this evening. Initially, the switch-hitting Victorino was slated to play 3 games with the R-Phils, but he will now not play on Thursday, as was expected, and instead take a day of rest prior to being activated to the MLB Phillies roster on Friday.

Victorino went 1-for-6 in 2 rehab games over the weekend with the Class A Lakewood BlueClaws.