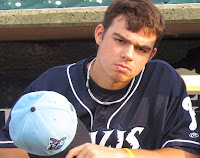 Jesse Biddle, last year's 1st round draft pick by the Phillies, is off to a less than ideal start to his first full season of professional baseball. Currently part of the starting rotation for the 2-time defending South Atlantic League champions the Class A Lakewood BlueClaws, Biddle has yet to earn his first win of the season, through 5 starts.

The 6-foot-5-inch, 235-pound lefty has posted a 0-4 record and a 5.91 ERA. But the failure to date has not soured the outlook of the smiley faced kid from Philadelphia.

"I don't think (my confidence level is effected) at all," Biddle said. "I had a much better outing last time. It just kind of sucks when all your hard work isn't panning out the way you want to."

Biddle allowed just 1 earned run in 5 innings pitched against Savannah in his most recent outing on Monday night, and walked just 2 while striking out 4, but still got stuck with a loss, when his BlueClaws teammates couldn't muster up much offense and fell by a score of 3-1.

His strike out to walk ratio is an alarming 19:14 in 21 1/3 innings pitched thus far in 2011. Adjustments normally wouldn't be what the doctor ordered for Biddle, but when his difficulty throwing strikes lasted and his walk rate stayed high, he worked with his pitching coach Steve Schrenk to refocus and fix the issue.

"The big thing was to go back to the basics," Biddle stated. "I think I was starting to over-complicate things a little bit. After having a couple bad outings, I really started to feel pressure a little bit and over-thinking things. My focus became just to throw to the (catcher's) glove and not worry about the batter or the baserunner...and that's what we were working on in the bullpen (sessions)."

Despite the slow start, Biddle is living the dream...pitching in the minors with an opportunity to develop into a Major Leaguer with the club he grew up adoring, his hometown Phillies. Always an optimist, Biddle won't let a bit of a losing streak ruin his outlook.

"I'm exactly where I want to be and I'm just going to start having some better starts now."

Anonymous said…
PhoulBallz leaves out the 4th inning standoff on Monday night. Runners on the corners, no outs. The kid didn't fold and battled hard to get the next three hitters out. That was as good an opportunity to show what you're made of as any I've ever seen.
May 4, 2011 at 4:42 PM