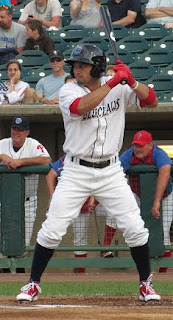 LAKEWOOD, NJ- Phillies centerfielder Shane Victorino looked good in his first rehab appearance with the club's single A affiliate the Lakewood BlueClaws on Saturday night. Victorino has been on the disabled list since May 19th with a strained right hamstring.

As the two-time defending South Atlantic League champions piled on early runs against the Greensboro Grasshoppers (Marlins affiliate), Victorino saw plate appearances in each of the game's first three innings.

Leading off in the top of the first inning, Victorino lined out to right field. In the midst of a 2nd inning rally, the man known as "the Flyin' Hawaiian" worked the count full and then walked with the bases loaded to force home a run and put the BlueClaws up 4-0. He later scored on a throwing error by Greensboro shortstop Daniel Black.

Batting with 2 outs in the third inning, and the 'Claws already leading 8-1, Victorino laced a fastball from 24-year-old righty hurler Kyle Winters into right field and drove in catcher Cameron Rupp to boost the Lakewood lead to 9-1.

Victorino played 5 full innings in the field and was on deck when the BlueClaws made their third out in the bottom of the 5th inning.

Overall on the night, the 30-year-old Victorino went 1-for-2 with a walk, a run scored and 2 RBI.

Victorino is patient and expects that he'll need a full allotment of rehab appearances to iron out the injury and get himself back to 100 percent.

"Everything went accordingly. You know, it is day one and there is almost a week left to get (my hamstring) healthy, so we're gonna take our time," said Victorino.

"I want to take as many games as I can," he added. "I mean, obviously, I want to get at bats. That's the main thing...getting at bats and feeling good."

With multiple teammates having missed time with injuries, the three-time Gold Glove Award winner expressed his eagerness for the big league club to potentially have its regular lineup together for the first time this season, once he makes his return from the disabled list.

"It's gonna be a very exciting time, I think. These guys are doing a good job right now, with guys missing. Having (33) wins and having the best record in baseball right now says a lot about our team...a lot of credit goes to our pitching staff.

"You know what, getting all of us back healthy, Charlie's gonna be able to put one lineup out there every night and let us go out there and run with it. It's a step in the right direction," Victorino stated.

Victorino feels that he will need as much rehab action as he can get before the Phillies can activate him for next weekend's series in Pittsburgh.

The plan for Victorino has him in action with Lakewood again on Sunday evening, playing seven innings. He is then slated to play with Double A Reading Tuesday through Thursday, prior to being activated to the Phillies' roster on Friday, barring any setbacks.

In the game at FirstEnergy Park on Saturday, righty starter David Buchanan (7th round draft pick, 2010) tossed 7 innings of 4-hit ball to earn his 7th win and lower his South Atlanic League leading ERA to 1.97.

The BlueClaws will begin a series, hosting the Delmarva Shorebirds on Sunday night at 7:05 PM.