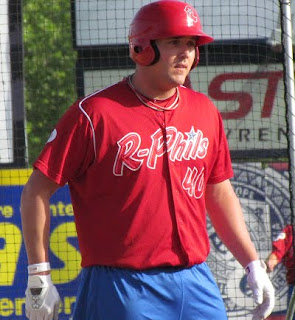 With first base for the Phillies occupied for the foreseeable future by former All-star and league Most Valuable Player Ryan Howard, minor leaguer Matt Rizzotti just doesn't have a clear path to the big leagues. Despite extremely solid success down on the farm, Rizzotti remains an understudy in waiting behind the 31-year-old Howard, who is signed with Philadelphia through the 2016 season.

Last season, Rizzotti shot up two levels in the Phillies' developmental ranks. The 6-foot-5-inch, 265-pound slugger began the 2010 season with the High A level Clearwater Threshers, earning a promotion to Double A Reading before ultimately landing with the Triple A Lehigh Valley IronPigs. Combined at the three levels, Rizzotti batted .343 with 36 doubles, 17 homers and 76 RBI in 124 games played. He was also selected to the Eastern League All-star game.

Thus far this year, Rizzotti is continuing to wreck EL pitching. Back with Reading, the Floral Park, NY native is batting .359 with 8 homeruns and 30 RBI in 39 games played.

Compared by some to the likes of former Phillie Jim Thome, at times, Rizzotti is similar to Howard also, in that all three players possess large frames that are best suited to man first base on the field. However, some baseball heads who have scouted Rizzotti claim that his defense requires a lot of improvement. Rizzotti hears those remarks.

"I've actually heard the term that I'm a butcher. I mean, I like meat, I really do. I enjoy a steak here and there. I don't know about being a butcher though. I'm gonna try and get better and I guess the butcher will be trying to perfect his cuts," Rizzotti joked.

Kidding aside, Rizzotti is pleased to speak of his time with the big club in Spring Training this year and anticipates more opportunities to play at that level. In 5 at bats, Rizzotti slammed a double and a homerun, while driving in 2 runs. Despite the success, attention and accolades, Rizzotti still remained a bit of a kid in a candy store when it came to participating in action with established MLB veterans this past spring.

"It's every minor leaguer's dream to just go up there. It was pretty cool, that there are guys we grew up watching on TV. It was just a taste of what it's like and how cool it is to actually be up on that level," Rizzotti said.

The 25-year-old Rizzotti cites spending time with Howard this spring as something he waited a long time for and a highlight of his professional career to date.

"Me and him had some good conversations about hitting. It was just good to be around him. Ryan Howard, it was just great to sit down and pick his brain and see what his whole theory is on hitting," Rizzotti stated.

Drawing an explosive output from his own abilities over the past two seasons, Rizzotti will be sure to draw interest from other teams as the trading deadline approaches this season. The Phillies will be sure to listen to such inquiries, as they too realize that Rizzotti is relatively blocked by the man known as "The Big Piece".

Reading manager Mark Parent says that Rizzotti was pulled back to the Double A level because the Phillies thought he still had things to improve on and Reading would be the best place to do so.

Parent does admit that it's just a matter of time before his "butcher" moves back up to higher levels.

"Eventually, they're gonna see if he can (compete at higher levels) or not. So far this season, he's improved in his defense, he's conditioning better. These are all things he's gotta work on. If he was to get called up, or taken to another club and go to the big leagues, he could go from (this level)," Parent said when speaking of the difference between Double A and Triple A in Rizzotti's case.

Either way...he's the Rizz, and nobody beats him.

And then at a recent game at Trenton my son's friend asked Matt for a pair of batting gloves. Matt gave him a pari of gloves but I suspect they were somebody else's. Matt wears gray/red gloves nad these were white/red. I suspect somebody on the team was missing a pair of batting gloves that night and I bet he's quite the prankster in the locker room!
May 20, 2011 at 3:33 PM

Ken J said…
Rizzotti is a great kid! Had a chance to talk to him at spring training when my son asked him to sign a couple baseball cards. Matt let him know that he's probably one of the few players that has a woman's face between his legs on a baseball card. Sure enough, becasue of the camera angle there is a woman's face right between hsi legs.

Then we saw him at Trenton last week nad my son's friend asked him for his batting gloves. Well he gave him a well used pair but they weren't his. matt wears gray/red gloves and these were white/red. I suspect someone on the R-Phils was missing a pair of gloves that night.

From these short interactions he comes across as a really nice guy and probably a prankster in the locker room. We wish him all the best!
May 20, 2011 at 4:09 PM