Scott Podsednik, who signed with the Phillies last weekend after being granted his release by the Toronto Blue Jays, made his official Phillies system debut on Saturday. Podsednik batted lead-off for the Phillies Triple A team, the Lehigh Valley IronPigs and went 0-for-4 with 2 strike outs in the contest against the Rochester Redwings (Twins).

The 35-year-old Podsednik is a veteran of parts of ten Major League seasons. Formerly an all-star with the Chicago White Sox and a member of the Brewers, Royals, Rockies, Dodgers and Mariners, Podsednik had signed as a free agent with the Blue Jays back in February.

After missing time this season with plantar fasciitis in his left foot, Podsednik played in 3 games with the Class A Dunedin Blue Jays, then played in 14 games with the Triple A Las Vegas 51's. Combined at the two levels of, Podsednik went 18-for-71 (.254 avg) with 2 doubles, 2 triples and 13 runs scored.

Podsednik had started his Phillies tenure down in Clearwater, FL at extended spring training on Thursday, reportedly going hitless in his debut there as well. 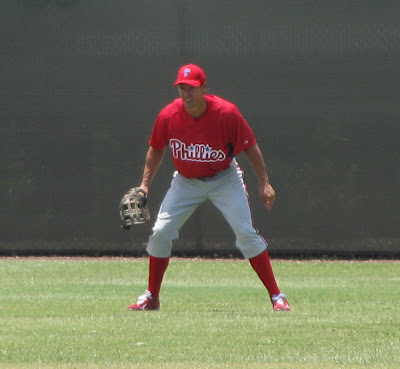 The addition of the experienced Podsednik adds depth to the outfield for a Phillies team that has struggled offensively and has been subjected to several key injuries this season.

For now, Podsednik will get the opportunity to display his talents with Lehigh Valley and it will be up to him to earn a promotion to the big show.