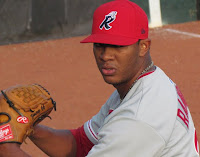 TRENTON, NJ- The big league match up in Florida wasn't the only game being billed as a pitchers duel on Tuesday night. In the second game of a 3-games series at Waterfront Park, Phillies minor league pitcher of the month for April JC Ramirez was set to lead Double A Reading against highly touted lefty prospect Manny Banuelos and the Yankees affiliate Trenton Thunder.

For one side, it was quickly evident that their hurler wasn't going to live up to the hype on this night.

Ramirez, a 22-year-old Nicaragua native, struggled through a long bottom of the 1st inning, tossing 31 pitches and letting up a run before he could retire the side. The difficult early frame set the tone for the right-handed Ramirez's night, as he did not make it past the third inning for the R-Phils, who dropped this game 4-2.

Trenton got the scoring started in the first when a lazy fly ball by Bradley Suttle got lost in the twilight sky by everyone on defense and fell in shallow center field to plate Austin Krum, giving the Thunder a 1-0 lead.

Reading clapped back in the 2nd inning to tie the game at 1, when Mike Spidale brought home Derrick Mitchell with an RBI single.

In the bottom of the frame, Trenton snatched the lead back quickly, as second baseman Corban Joseph smashed a lead off triple and was brought home on right fielder Ray Kruml's single. Later in the inning, Thunder shortstop Jose Pirela slapped a base hit off of Reading shortstop Freddy Galvis' mitt, which enabled Kruml to score and put Trenton up by 2. Pirela's hit was the third of the night surrendered by Ramirez that ricocheted off a teammate's glove.

The Thunder added another run in the 3rd, when designated hitter Cody Johnson sent a dunker over the right field wall and into the Delaware River.

An RBI double by Reading catcher Tuffy Gosewisch in the 5th inning brought Reading within 2 runs, but it would be the final run of the game.

Banuelos, a 20-year-old Mexico native, earned the win, as he struck out 5 batters over 5 innings and allowed just 3 hits and 2 earned runs.

Ramirez took the loss, his second of the season. The 6-foot-3-inch, 225-pounder posted four terrific efforts in April to earn the nod as Phillies Minor League Pitcher of the Month. In those games, Ramirez posted a 4-0 record with a 1.03 ERA. In two outings since then, he is 0-2 with a 9.52 ERA.

"He really struggled. The biggest thing is running deep counts. A couple key hits for them and a ball lost in the sky, then it was deep counts in the first inning and it just continued." Milacki said.

Reading's announced pitch count was 68 pitches for Ramirez. The decision was made to go to the bullpen in the 4th inning.

"We (pulled him) after 3 innings because of how much he pitched in the first inning and two more long innings after that," Milacki said.

Ramirez expressed that his drastic slide since the calendar flipped over to May is due to a lack of belief in his pitch repertoire and blamed himself for the recent downturn.

"I think it's confidence. When you've got no confidence, you've got nothing, you know? I think that's the obvious thing right now. I didn't have confidence in my pitches, so that's something I need to get back. I just wasn't focused." Ramirez stated.

Solid relief work from Tyson Brummett and Jacob Diekman kept the Phils in the game, shutting out the Thunder offense for 5 innings. Brummett, a 7th round draft selection in 2007 by Philadelphia, threw 2 2/3 innings, allowing just 1 hit and no runs while striking out 2 Thunder batters. Diekman, a left-hander taken in the 30th round in 2007, tossed 2 1/3 scoreless, striking out 1 and allowing 1 hit.

The 26-year-old Brummett's ERA now stands at 1.89 through 9 games this season.

Triple A Lehigh Valley won their game on Tuesday 3-1 over Toledo. Minor league vet Kevin Frandsen recorded 2 hits including a homerun while lefty Mike Zagurski (1.08 ERA for the Pigs this season) recorded his 4th save. Dom Brown went 1-for-4 with a double. He has hit safely in all 8 games played with Lehigh Valley this year.

High A Level Clearwater lost to Palm Beach, 5-1. Starter Jonathan Pettibone (1.69 ERA) took the loss, allowing 1 ER in 6 2/3 innings, dropping his season record to 3-2. Chase Utley went 1-for-4 in that game, as he began an official rehab assignment on Tuesday. Catcher Sebastian Valle had 2 hits and is batting .303 this season in 23 games.

Class A Lakewood lost at Greensboro, 9-2. Three BlueClaws regulars (CF Aaron Altherr, C Cameron Rupp and LF Zach Collier) have batting averages below .200. Infielder Alan Schoenberger (1-for-5, double, 2 RBI) is batting .333 with a .945 OPS in 8 games since being assigned to Lakewood from Clearwater.