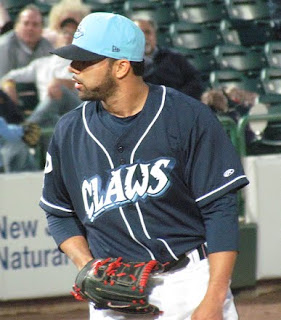 LAKEWOOD, NJ- With Phillies' left-handed reliever JC Romero on hand, the Class A Lakewood BlueClaws locked down a win to avoid a sweep at the hands of the Mets affiliate, the Savannah Sand Gnats, on Tuesday night.

Romero was on a rehab assignment after being placed on the disabled list on April 19th with a right calf strain.

Set to throw one inning, the first batter that Romero faced put up quite a fight and refused to be retired by the left-hander's best off-speed stuff. Savannah left fielder Cory Vaughn, son of former Major League player Greg Vaughn, worked a full count and fouled off many of Romero's toughest offerings until he worked a walk.

"Right from the get go I had a great battle with (Cory) Vaughn. I faced his dad and I guess I got his daddy out, but I couldn't get the son," Romero said.

Unable to retire the younger Vaughn at the plate, Romero removed him from the base paths, when he picked off the 22-year-old righty hitter, who was a 4th round draft selection by New York last year.

"He is really good. I didn't know who it was until I got back to the dugout and I asked (Steve Schrenk), 'Who was that kid?' And he told me it was Greg Vaughn's son. And I'm like, 'Wow!' He seems like he has a great plan at the plate and I threw him some good change ups and he fouled off a lot of pitches. I think he has a great future," Romero said.

Romero then retired the next two batters, one on a fly out and another with a swinging strike out. Romero's cutter ranged from 85-88 MPH on the stadium radar gun. He threw 18 total pitches, 13 for strikes.

The 12 year Major League veteran said that striding and landing were not difficult for him. The challenging part, during Romero's recovery process, has been turning to cover a base on batted balls. Romero was pleased with his performance and felt no discomfort at all, during or after the outing.

"It was good. I mean, the leg was fine. That was the most important thing. The arm speed was there, it's just a matter of getting back out there and getting back in the heat of the battle," Romero stated.

Romero had previously rehabbed with the BlueClaws in 2009. After his second trip to Lakewood, Romero spoke well of the club's home, FirstEnergy Park, and its fans.

"I remember my days in the minor leagues and for a Single A facility, this is really good. The mound was good...it had a nice height to it. But the most important thing for a baseball field, other than the facility, is the atmosphere that the fans provide and it feels like it's good here," Romero said.

Romero declared that he is healthy and ready to be activated, but plans are for him to be further evaluated by team physicians in Philadelphia on Wednesday morning before any decisions are made.

Righty Garett Claypool, Lakewood's newest official starter, after he replaced Colby Shreve in the team's rotation, had control issues early. He walked two batters and hit another to load the bases in the 1st inning. Savannah first baseman Sam Honeck made Claypool pay, when he smacked a bases clearing double that put Lakewood in an early 3-0 hole.

Things would turn around for the home team hurler, however. Following a 1 out single in the second inning, Lakewood pitchers faced the minimum amount of batters the rest of the way, thanks to Romero's pick off, an outfield assist, a double play, a caught stealing and, of course, strong pitching. BlueClaws hurlers Claypool, Romero, Shreve and Juan Sosa closed out the game in 23-up and 23-down fashion.

On the offensive side, the BlueClaws chipped away at Savannah's lead. Third baseman Stephen Batts crushed a solo homer beyond the grass berm deep to left field in the 2nd inning. Following a Miguel Alvarez single, Carlos Perdomo tripled to cut the Savannah lead to 1 run. Lakewood tied the game at 3 in the 6th inning when Jim Murphy scored on a passed ball.

In the 7th inning, Lakewood would take the lead on a unique play that confused folks in the stands, in the press box and even on the field. With the bases loaded, Anthony Hewitt popped up between first baseman Honeck and second baseman Luis Nieves. The infield fly rule was called, but neither fielder caught the ball. Unsure or unaware that the infield fly rule was called, Hewitt stayed on first and all three base runners moved up. Honeck fired home, but catcher Albert Cordero, thinking it was a force play, simply stepped on home plate without tagging the runner, Alvarez, who was ruled safe and put the 'Claws up 4-3.

Right-hander Juan Sosa closed things out for the save and Shreve earned the win.

Cameron Rupp, last year's 3rd round draft pick by the Phillies who caught Romero on Tuesday, on his first time ever working with a big league pitcher: "It was a pretty cool experience. And, hopefully, later on down the road, I'll be able to catch him every day."