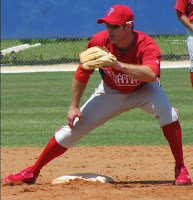 The biggest news pertaining to the upcoming Reds vs. Phillies series is the return of Chase Utley. The 32-year-old all-star second baseman will make his 2011 season debut after being activated from the disabled list.

Utley has missed time with tendinitis and chondromalacia of his right knee. He has been playing in games with the Phillies extended spring training club and their High A Level team in Clearwater in recent weeks, as part of a rehab assignment.

A secondary storyline of importance is the rematch of last year's Divisional Playoffs, when Philadelphia swept Cincinnati out of the postseason in 3 games. Roy Halladay tossed the second ever postseason no-hitter in game 1 of that series at Citizens Bank Park.

In the opener for this series, the Phillies will send lefty Cole Hamels, who shut out the Reds to force their exit from the 2010 playoffs, to the mound. Cincinnati will counter with right-hander Bronson Arroyo, who hasn't had much success against Philadelphia in his career.

Read ahead for much more information on the pitching match ups and other stats for this 4-game series.

Last year's National League Most Valuable Player Joey Votto is batting .343 with a 1.073 ERA on the road this year through games played on Saturday.

In 12 career regular season games against the Phillies, Reds closer Francisco Cordero has a 1-0 record with 6 saves in 8 chances with a 2.19 ERA and a .116 batting average against.

Jimmy Rollins is a career .287 hitter with 50 runs scored in 67 regular season games against the Reds. Rollins has a .676 OPS in 33 night games this season.

Chase Utley is a career .324 hitter in 41 regular season games against the Reds. Utley posted a .925 OPS in 61 home game last season.