By Jay Floyd December 01, 2010
On Tuesday, I took part in a roundtable discussion with PhilliesNation.com. The subject at hand was "Of the currently available free agent relief pitchers, who should the Phillies attempt to sign?"

While some folks feel that names like Scott Downs, Dan Meyer and others are suitable fits for the Phillies bullpen, I disagree. Read what I had to say below, and click HERE to check out what the other PhilliesNation contributors had to say about this matter.


Which free agent relievers should the Phillies target?

NONE OF THEM. Free agent relievers are too hit or miss, as the Phillies and their phans saw last season when Jose Contreras and his statistics were a pleasant surprise, while Danys Baez and his weak production proved to be money virtually wasted. With the Phillies’ current crop of solid pitching prospects, I don’t feel it is necessary to sign a potentially costly free agent.

Sure, there seems to be a need for an additional lefty reliever, but is Scott Downs and the draft pick he could cost the Phillies, as a type A free agent acquisition, absolutely worth the big money he is poised to draw from a potential suitor? Maybe…maybe not. Relievers’ numbers go up and down from year to year and while Downs has posted great stats in recent years, his career ERA is 3.79, which means his output prior to his recent 1.78 and 2.64 ERA seasons was considerably far off.

And what sort of contribution would Chad Durbin offer, if the Phillies re-signed the righty veteran? It’s hard to tell, as he has posted ERA’s of 4.72, 2.87, 4.39 and 3.80 in his most recent four seasons.

The Phillies have several up and coming prospects as well as some familiar big league types that could make a considerable impact out of the bullpen in 2011. Among those pitchers are Scott Mathieson, Antonio Bastardo, Mike Stutes, Eddie Bonine, Justin De Fratus, Sergio Escalona, Ryan Feierabend and Mike Zagurski. In addition to those guys are a few more young hurlers who might be just a step behind, like Michael Schwimer, JC Ramirez and Austin Hyatt. 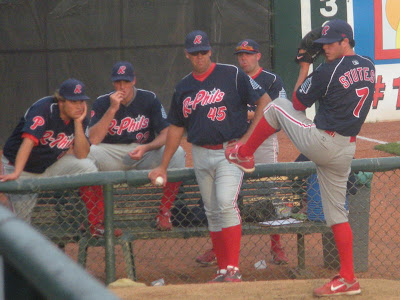 Zagurski, Mathieson & others watching Stutes warm up in 2009

With such a full crop of relief talent waiting to step up and contribute behind the core of Brad Lidge, Ryan Madson and Jose Contreras, as well as the other members of the big league pitching staff (Baez, David Herndon and the “loser” of the proposed 5th starter duel between Kyle Kendrick and Vance Worley) already in place, I don’t think the Phillies need to spend money on more risky bullpen arms.