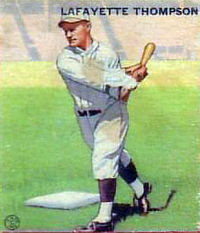 Fresco Thompson was a second baseman with the Phillies from 1927-1930. A righty batter who played in the Major Leagues in 9 different seasons, Thompson's best years in the bigs were with the Phillies.
Thompson, whose given first name was Lafayette, made his MLB debut in 1925 as a member of the Pirates. After spending the 1926 season with the Giants, Thompson was acquired by the Phillies in a 3-team trade with the Robins (also known as the Dodgers) and the Giants, prior to the 1927 season.
With the Phillies, Thompson posted impressive numbers in his first full season as an everyday player. In 153 games, he batted .303, hit 32 doubles, scored 78 runs and drove in 70 runs. Speed was also a key part of Thompson's game as he stole 19 bags and laced 14 triples in 1927.
Over the next three seasons, Thompson would continue to contribute offensively, notching no less than 34 doubles each season and scoring 99 runs, or better, twice.
Thompson was quoted reflecting on his time with the Phillies, "It was some club. I hit .324 one year and was sixth or seventh in the club batting averages. They wouldn't even let me take batting practice and I wasn't allowed to talk to Lefty O'Doul and Chuck Klein, who were really murdering the ball. Our main trouble was we had no pitchers. We lost games by football scores."
Fresco Thompson's time in Philadelphia ended following the 1930 season when he was traded to the Dodgers along with Lefty O'Doul for pitcher Clise Dudley, pitcher Jumbo Elliot, outfielder Hal Lee and cash.
After limited action with Brooklyn, Thompson's playing days were soon over in the Majors. He soon began managing in the minor leagues and later joined Branch Rickey in the Dodgers front office. Over the next 20 years, Thompson climbed the executive ranks. Thompson was in charge of the Dodgers developmental system until he was promoted to the team's vice president in after Rickey departed in 1950. Thompson held that position until he was later named General Manager of the organization in June, 1968. However, within weeks, Thompson was diagnosed with cancer and died in November of that year at the age of 66.
________________________________________________________
You can follow PhoulBallz.com on Twitter by clicking HERE.