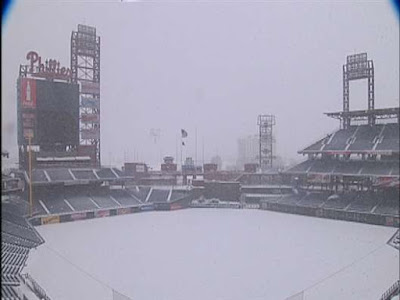 Sure, free agency and the Hot Stove can provide plenty of news at this time of the year, but there are actual games being played...somewhere. Let's take a look around the varying "Winter" leagues that are going on all over the world, to review how players with current Phillies ties are performing.

In the Dominican Winter Baseball League...
Domonic Brown was a member of the Escogido Leones, but left the team last week. After struggling in 9 games for the Leones, Brown's Winter league stint was cut short. He went 2-for-29 (.069 avg) with 1 double and 8 strike outs.
2010 Phillies rookie hurler David Herndon has looked sharp thus far out of the bullpen for the Cibao Gigantes. In 6 games, Herndon has thrown 6 2/3 innings and held opponents to a .167 average without allowing a run.
Phillies lefty reliever Antonio Bastardo is also a member of the Gigantes relief corp. In 7 games, Bastardo, a native of the DR, has a 0-1 record with 7 strike outs and 1 walk in 9 innings. He has held opponents to a .100 batting average while not allowing any earned runs.
Juan Perez, a lefty pitcher signed by the Phillies this off-season, is another member of the Gigantes pitching staff. In 22 games, Perez, a native Dominican, has a 1-1 record with a 6.55 ERA. In his last 10 outings, Perez has a 1.50 ERA and has held opponents to a .091 batting average.
Timo Perez, a one-time New York Metropolitan, who was signed by the Phillies in July and assigned to the Double A Reading club, is posting good numbers for the Licey Tigres. In 36 games, Perez is batting .293 with 2 HR and 18 RBI.
Yohan Flande has not appeared in a game for the Toros since he was released by the Phillies last week. It is possible that the Dominican native has put his Winter league activity on hold until he re-signs with a Major League organization. In 6 games, the lefty Flande was 1-1 with a 4.91 ERA and 13 strike outs in 18 1/3 innings.
In 15 games for the Aguilas, Derrick Loop has a 1-1 record with a 3.24 ERA. Opponents are batting .289 against Loop, who pitched for both Clearwater and Lehigh Valley in 2010.
Switch-hitting infielder Ozzie Chavez, who played for Reading and Lehigh Valley in 2010, is having a rough time in the Dominican league. In 13 games, Chavez is batting .130 with a .416 OPS.

In the Mexican League...
Highly regarded prospect Sebastian Valle is putting up decent numbers for his hometown Los Mochis Caneros. Valle, a righty hitting catcher, has a .243 average with 4 doubles, 3 HR and 12 RBI in 39 games. Valle was ranked number 6 on Baseball America's top ten Phillies prospects released on Monday.
Angel Chavarin, a 20-year-old catcher, played in two games with the Aguilas, but has not seen action in over a month. There is no official word on his status.
2010 Lehigh Valley IronPig pitcher Brian Mazone pitched in 3 games early in the season for the Aguilas, but his time there is likely over after allowing opponents to hit .390.

In the Puerto Rican League...
Righty prospect Julio Rodriguez, who pitched with Williamsport and Lakewood in 2010, is looking solid in PR action with the Carolina Gigantes. In 9 games (8 starts), Rodriguez has a 3-1 record with a 2.20 ERA. Rodriguez also pitched for Puerto Rico in the Pan-American qualifying tournament this off-season.

In the Venezuelan League...
Infielder Freddy Galvis batted .188 in 21 games with the Magallanes Navegantes. Galvis, a switch-hitting 21-year-old, has not played in more than a month.
Harold Garcia is posting decent stats with the Zulia Aguilas. The 24-year-old, who made headlines in 2010 by setting the Florida State League hitting streak record at 37 games with Clearwater, is batting .286 with just 1 extra base hit (a double) in 28 games played. Garcia stole 42 bases with Lakewood in 2009, but is just 1-for-5 in stolen base attempts in the Venezuelan League.
Another member of the Aguilas is 24-year-old Fidel Hernandez, who is batting .200 with 2 doubles and 2 RBI in 32 games. Hernandez, an infielder, was signed at age 17 in 2003 by the Phillies and played with Clearwater and Reading in 2010.
Venezuela native Sergio Escalona has looked quite solid with the exception of one game. Escalona has no decisions and a 5.19 ERA in 14 games with the La Guaira Tiburones. He had one poor outing in which he allowed 4 walks and 5 earned runs in 2/3 of an inning, but has held opponents scoreless in his other 13 relief appearances.
28-year-old infielder Melvin Dorta, who played for Reading and Lehigh Valley in 2010 has picked up his production lately, batting .333 in his last 10 games. Dorta has a .196 overall average in 17 games with the Aragua Tigres.
Luis Unda, a 20-year-old outfielder, played in 4 games with the Lara Cardenales and went 3-for-9. Unda has not played in over a month. In 2010, Unda was a member of the Gulf Coast League championship Phillies team.
2010 Lehigh Valley IronPig Andy Tracy is batting .314 with a HR and 3 RBI in 14 games as a member of the Margarita Bravos. Tracy initially began playing in the Dominican Winter Baseball League, but moved on after his dismal production got him benched. Tracy posted Dom Brown numbers, going 2-for-29 in 8 games, in the DWBL.
Also on the Bravos roster is 20-year-old second baseman Cesar Hernandez, who is a native of Venezuela. Hernandez spent the 2010 season with the Williamsport Crosscutters, where he batted .325 with 32 steals. In 13 games with the Bravos, he is batting .286 with no extra base hits and no stolen bases.