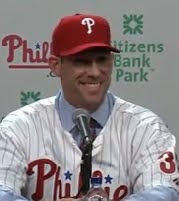 The Phillies hosted a press conference on Wednesday at Citizens Bank Park to announce the signing of free agent pitcher Cliff Lee, who they traded away last December. Lee signed a 5-year contract worth a guaranteed $120 million on Wednesday.
The deal's annual salaries are laid out like this-
2011...$11 million
2012...$21.5 million
2013...$25 million
2014...$25 million
2015...$25 million
There is a vesting option year for 2016 that could pay Lee $27.5 million. The option year vests if Lee throws 200 innings in 2015, or a combined 400 innings in 2014 and 2015. If the option year does not vest, there is a $12.5 million buyout built in.
Lee and his family loved their time in Philadelphia the first time, and that weighed greatly on his decision to return. Read all about this and more of what Cliff Lee had to say in the press conference excerpts below.

On his return to Philadelphia- "It feels great to land back here in Philadelphia....I never wanted to leave this place in the first place. So, to get an opportunity to come back and be part of this team and this pitching rotation is going to be something that's historic, I believe. I can't wait to get to spring training and get this thing going."

On his attraction to Philadelphia- "I never held any grudges from being traded. I understand it's a business and things like that happen. But, from the moment I got here, on the first day, I knew that it was something special and something that I enjoyed. I wasn't sure if I was going to get an opportunity to come back or not, but the way things played out, I got that opportunity and here I am. When you set back and evaluate your options and you get a chance to pitch in this rotation with Halladay, Oswalt, Hamels...that's all I needed to see right there. Give me a real option to do that, and that was the main thing- getting the chance to be part of that rotation. With this team, it was kind of a no-brainer for me."

On the concept of leaving money on the table- "It's plenty of money. When you hit a certain point, enough's enough. It's just a matter of where you're comfortable, where you're happy, where your family's the most comfortable, what team gives you the best chance to win. At this point, it's about trying to win championships. That's really the number one thing for me. I think this team gives me the best chance to do that."

On the Citizens Bank Park atmosphere- "You can feel the volume. Every game has got an elevated feel to it, compared to everywhere else. It’s completely different. I don’t know what the fans do to create that much more volume and excitement in the stadium, but it’s definitely something extra here. I don’t know what it is, but it’s something they’re doing. But they get excited. They’re passionate fans.

They understand that’s going on. They don’t need a teleprompter to tell them to get up and cheer, to do that. No, it’s exciting. It’s an historic town. I didn’t realize until I got here how interesting the city is. And my family really liked it. I mean, that played a big part of it.

The feeling of playing on the field feels different than anywhere else. I don’t know how to explain it other than you can feel the volume that’s created by the fans and their intensity."
On his discussions with pal Jayson Werth, who signed with the Nationals- "I don't know if I can say exactly how that conversation went down, here. But, I know once we both got on the free agent market, we both talked about 'Let's try to get on the same team.' Obviously, when he signed with the Nationals and I signed here it didn't happen. But when he found out I was coming here he wasn't the happiest person in the world, I'll put it that way."

Quotes like that is why Philadelphia loves and respects this guy so much. I missed the press conference so this was a great read. Keep it up.
December 16, 2010 at 11:32 AM

Yeah, Lee is tremendous and it's long been a dream of all Phils phans for this team and this city to be a desired destination for big name players. The time is now.
December 17, 2010 at 2:47 PM