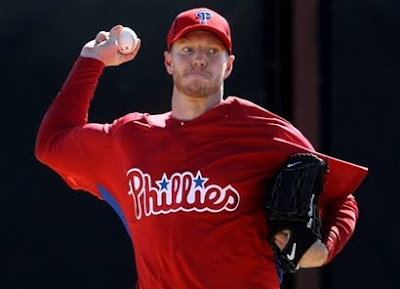 Phillies pitcher Roy Halladay was honored as the 2010 pro athlete of the year, in the latest edition of The Sporting News. In his first season with the Phillies, Halladay threw a perfect game during the regular season and notched the second no-hitter in MLB postseason history. His overall regular season record was an impressive 21-10 and his 2.44 ERA helped him lock down the National League Cy Young Award. As the Phillies' ace, Halladay threw more complete games (9) than any other team in the National League.
The issue includes an article written by Halladay. In the piece he mentions the fancy watches he purchased for all his teammates and team staff following his perfect game in May. Halladay references the phrase he had engraved into each gift, "We did it together", and elaborates...
"Looking back on the entire 2010 season, I feel it can be summed up in those four words. I might someday forget the details of the perfect game, the playoff no-hitter and and other individual moments, but never the camaraderie that we had. I include the fans of Philadelphia in that, too. The people who surrounded me throughout the season ere integral parts of my five favorite moments from the best year of my baseball life."
The Sporting News 2010 Pro Athlete of the Year issue, out now, is available on news stands everywhere.
_______________________________________________________________