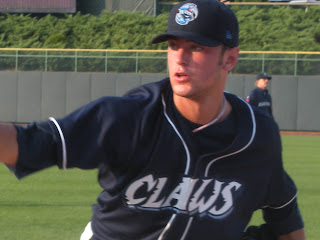 With the release of Baseball America's list of top ten Phillies prospects on Monday, some players will be receiving some much deserved attention. One in particular, Jarred Cosart, is a fireballing right-handed starting pitcher with the potential to move up the organizational rankings very quickly.

The 20-year-old Cosart has excellent command and a superior fastball that regularly hits 97 MPH. As a member of the Class A Lakewood BlueClaws in 2010, Cosart posted a 7-3 record with a 3.79 ERA and 77 strike outs in 71 1/3 innings pitched. He projects to be the type of pitcher whose presence could effect the odds involved in Sports Betting some day, much like Cliff Lee did when news leaked that the Phillies were preparing to sign him this week.

Cosart missed much of the 2010 season with an elbow injury, but the Phillies did a superb job of catching the injury, before it was too late, and shutting him down to prevent further damage. Cosart was was back to 100% in time to spend the month after the season pitching in instructional ball at the Phillies spring training facility in Florida. While there, he experienced no hindrances. The Phillies were satisfied with the progress he made, despite being a bit rusty following the period away from game action. "There were absolutely no setbacks in instructional league, just a little bit of rust having not thrown to live competition for a few months. The arm felt great, though. And overall, the coaches were very pleased with my outings and, obviously, that the arm felt good," Cosart said in an exclusive interview.

Despite missing time, Cosart was able to improve on various aspects of his game. The Texas native developed a better curveball and refined his delivery to enhance deception when it came to his change up. His focus on conditioning, resulting from his rehab work, is likely to keep him in better shape going forward as well.

Cosart, a 38th round draft selection in 2008, did not appear in a game after June 26th last season, when he left a road start after 2/3 of an inning with the elbow discomfort that landed him on the disabled list for the remainder of the season. Looking forward to 2011, Cosart is squarely focused on having an injury-free season and developing himself further. "The biggest goal is staying healthy. I'm 100 percent confident in my pitching ability. I just need to get over the little setbacks I've had. I want to establish myself as one of the best and get better each time I take the mound, every fifth day, as well as the days in between," Cosart said.

The Baseball America list of Phils prospects also included six other players that appeared with the Lakewood BlueClaws championship club in 2010. The opportunity for so many of Philadelphia's best young talent to have bonded together while getting used to the postseason at such an early age could be beneficial to all of them in the long run, as the players move closer to the big show, according to Cosart. "I can't even express the brotherly love that we had in Lakewood. From the coaching staff to the players, everyone got along and we all wanted to win. It would be an honor and a great experience to (some day) put on a Phillie uniform with some of the same teammates I won a South Atlantic League championship with," Cosart said.

With plenty of minor league players' eyes aimed toward the ultimate goal of the big leagues, it's surely a positive thing when those hungry individuals can get to see big league talent up close in the same dugout. During the 2010 regular season, home grown Phillies stars such as Carlos Ruiz and Ryan Howard, both former BlueClaws, made rehab appearances in Lakewood. Ruiz and Howard were an inspiration to the Lakewood players as each one serves up proof of the organization's ability to draft and develop key talent for the parent club.

"It's exciting to everyone to see that the Phillies like to develop their Major League team from the minor leagues," Cosart stated.

The off-season has brought down-time for Cosart and resulted in him missing the game of baseball. He missed the roar of the crowd so much this off-season that he set up an account on Twitter, in order to interact with baseball fans via the internet. In addition to chatting with the Phillies faithful on a regular basis, Cosart is staying busy this off-season by working out with a trainer and has continued a steady routine of stretching exercises, which he feels is key for a pitcher's health. His throwing routine will begin this week, leading up to an early arrival at spring training on January 15th, where he hopes to prove himself worthy of a move upward in the Phils' system.

Looking forward to rubbing elbows with some more big league talent, Cosart cites the opportunity to work closely with the parent club's premiere pitcher in Clearwater as too good to pass up.

"I wouldn't say I'm heading there early because I missed time, but because I'd like the opportunity to...be able to be around guys like Roy Halladay to learn anything I can that will help me become a better person and player."

OBC said…
It is great to hear that the young guys really aspire to stay in this organization and learn from the stars that are there.
December 15, 2010 at 9:42 PM

IlovethePhillies said…
Cosart was one of the young players that got up and worked with Kyle Kendrick and Roy Halladay every morning. Hopefully we'll see more of the same this year.
December 17, 2010 at 10:52 AM