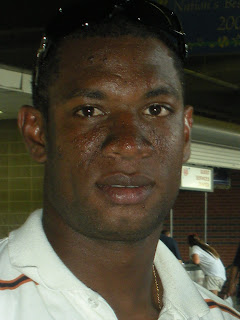 While several free agent and potential trade names have been floated around at this week's Winter Meetings in Orlando, Florida, with the Phillies organization attached to them, the moves that the Phils have actually made were of minimal impact at the minor league level. In an effort to clear space on their 40-man roster, the Phillies released pitchers Yohan Flande (pictured) and Jesus Sanchez.

Flande, a Dominican lefty hurler that will turn 25 years old prior to spring training, is currently pitching for the Toros in the Dominican Winter Baseball League. In 6 games (4 starts), Flande has posted a 1-1 record with a 4.91 ERA and a .303 batting average against for the Toros. In 27 starts for the Double A Reading Phillies this year, Flande went 10-8 with a 4.38 ERA.

The right-handed Sanchez performed well this season with the High A level Clearwater Threshers as a starting pitcher. In 23 games (22 starts), Sanchez, who turned 23 years old after the season, posted a 9-7 record with a 2.99 ERA. Sanchez was a key pitcher on the Lakewood BlueClaws team that won the South Atlantic League championship in 2009. He was also the last remaining player that the Phillies acquired in the trade that sent Bobby Abreu to the Yankees in 2006.

Flande and Sanchez were among players added to the Phillies' 40-man roster in November 2009 to protect them from last year's Rule 5 draft, the annual selection process aimed at preventing teams from stock piling too much talent in the minors and leaving players there to relatively waste away. Each pitcher is now available to any team that wants to claim them off waivers.

According to David Hale, of The News Journal, the Phillies will attempt to reach new contractual agreements with Flande and Sanchez. Each pitcher would need to clear waiver before that happens.

What do these moves translate to? The Phillies likely have their sights set on some players, that they feel two 40-man roster spots could be better utilized on, in the Rule 5 draft this coming Thursday, December 9th. And with so many pitching prospects outshining Flande and Sanchez this season, the organization must not feel too concerned about potentially losing one or both of these individuals.

In other news from the organization, the Lakewood BlueClaws announced that their parent club, the Phillies, would be making a stop at the Woodlake Country Club in Lakewood, NJ on Wednesday, January 26th, 2011, as part of the club's Winter Tour. Phillies manager Charlie Manuel and general manager Ruben Amaro Jr. will be on hand. Registration for the dinner event is $40 per person and proceeds will benefit BlueClaws charities. To sign up, click here, or contact Amy DeMichele at 732-901-7000 ext 172.