By Jay Floyd December 28, 2010
The stove stays hot during the off-season, but there are Phillies and Philadelphia prospects playing games around the world. It's time for another review of the various Winter Leagues.


In the Puerto Rican League- 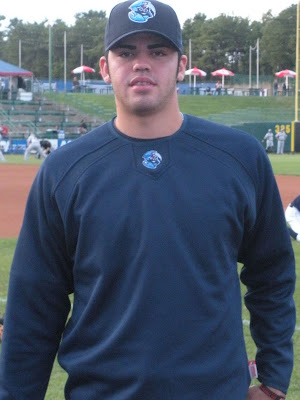 Righty hurler Julio Rodriguez has pitched very well for the Gigantes. A native of Puerto Rico, the 20-year-old Rodriguez has posted a 3-1 record and a 2.00 ERA in 11 games (9 starts) while striking out 25 batters in 40 innings pitched.


In the Venezuelan Winter League-

Lefty reliever Sergio Escalona, who pitched with the big league Phillies in 2009, has appeared in 22 games for the Tiburones. He has yet to record a decision and has a 4.50 overall ERA. In his last 10 games, Escalona has posted a 2.45 ERA and allowed runs in only 1 appearance. In 50 games at Double A Reading in 2010, Escalona had a 4-8 record with 10 saves and a 3.81 ERA while holding opponents to a .227 batting average. Escalona turned 26-years-old in August.

Fidel Hernandez, a 24-year-old Venezuela native, posted a .206 batting average with just 2 doubles and 2 RBI in 35 games with the Aguilas. During the 2010 regular season, Hernandez, who primarily plays second base, batted .279 with 1 homerun and 22 RBI in 69 games with the High A level Clearwater Threshers and went 7-for-15 (.467 avg) in 4 games with the Double A Reading Phils.

Another member of the Aguilas roster, Harold Garcia has a .286 average through 28 games played. However, Garcia has just one extra base hit (a double) and has been successful in only 1 of 5 stolen base attempts. In the 2010 regular season, The 24-year-old, made headlines by setting the Florida State League hitting streak record at 37 games as a member of the Clearwater Threshers.

Infielder Freddy Galvis batted .188 in 21 games with the Magallanes Navegantes, but he appears done with Winter League action, as he has not seen playing time since November.

Melvin Dorta has not had an outstanding Winter, as his overall average and OPS are just .231 and .555 respectively in 25 games for the Tigres. Having posted a .300 average in his last 10 games, Dorta, a 28-year-old Venezuelan born infielder, is looking to shine after batting .282 in 103 games at Double A and Triple A for the Phillies this year.

Cesar Hernandez, a native of Venezuela, spent the 2010 season with the Williamsport Crosscutters, where he batted .325 with 32 steals as a 20-year-old. In 13 games with the Bravos, he is batting .286 with no extra base hits and no stolen bases.


In the Mexican League- 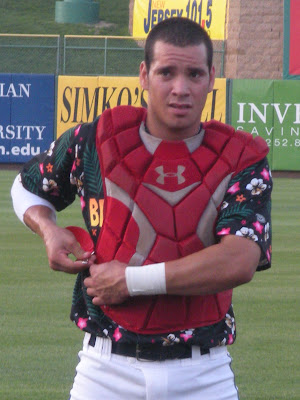 Catching prospect Sebastian Valle is batting .291 with 8 homers and 27 RBI in 50 games with the Caneros. During the regular season this year, the 20-year-old Valle helped lead the Class A Lakewood BlueClaws to a repeat as South Atlantic League champions, batting .255, slugging 16 homers and driving in 74 runs in 117 games.

With the Aguilas, Angel Chavarin played in two games, but has not seen action in over a month. The 20-year-old catcher batted .192 in 11 games as a member of the Gulf Coast League Phillies in 2010.

Brian Mazone, who pitched in 2010 with the Triple A Lehigh Valley IronPigs, appeared in 3 games early in the season for the Mexican League's Aguilas, but his time there is over after allowing opponents to hit .390.


In the Dominican League-

2010 Phillies reliever David Herndon appears to have completed his time with the Gigantes, as it has been nearly three weeks since he saw game action. In 6 games, the right-handed Herndon recorded no decisions and allowed no runs.

Lefty reliever Antonio Bastardo has also completed his Winter duties with the Gigantes. In 7 relief appearances, Bastardo, who pitched with the Phillies in the 2010 regular season, recorded 1 save, struck out 7 batters in 9 innings and held opponents to a .100 batting average.

Juan Perez, a lefty pitcher signed by the Phillies this off-season, is another member of the Gigantes pitching staff. In 27 games, Perez, a native Dominican, has a 2-2 record with a 5.52 ERA.

Derrick Loop, who pitched with the High A level Clearwater and Triple A Lehigh Valley in 2010, has a 1-1 record with a 2.79 ERA in 16 games with the Gigantes.

Former Mets outfielder Timo Perez, who played with the Double A Reading Phillies in 2010, has a .279 average with 2 homeruns and 18 RBI in 38 games for the Tigres.

Dominican born infielder Ozzie Chavez is batting .219 with no extra base hits in 15 games with the Toros. Chavez batted .219 during the 2010 regular season in 122 combined games in Double A and Triple A in the Phils' system.


In the Australian League-

With the Bandits, infielder Alan Schoenberger is batting .217 with 2 homeruns and 8 RBI in 17 games. Schoenberger, a 21-year-old native of Australia batted .253 with 5 homers and 35 RBI in 96 games with the Class A Lakewood BlueClaws during the 2010 regular season.