By Jay Floyd December 04, 2010
Welcome to the fourth night of the annual Phillies video countdown that we do each year during Hanukkah!

On the list of top Phillies videos of the season, we can't forget about this gem, brought to us by the folks at TastyKake. This season's edition of the annual ad that co-stars the Phillie Phanatic and Kirbee Krimpet, also featured a pair of handsome local bloggers/writers that you may be familiar with. "Ryan Petzrawr", of Long Drive and TheFightins.com fame, and yours truly, "Jay Ballz", were on hand this year on a brisk March morning to film the TV spot that was seen during each Phillies game throughout the 2010 season.
While my filmed closeups were not included in the spot, Ryan and some friends were featured more prominently. The screen capture below shows one of the multiple group shots that I was featured in (far left). Ryan happens to be the lucky individual seen high-fiving the Phanatic in every version of this advertisement. 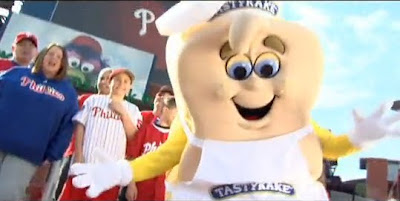 Check out the media player below to watch the commercial in its entirety. And in case you are wondering if this video would be ranked #5 on the countdown if I was not in it...HELL NAWWW, it wouldn't be! It's no secret that I can be partial to folks known as me and my friends and there's nothing wrong with that. Shouts out to other phriends seen in this ad- Kerri, Jaimie and Seth!