End of an Era: Charlie Manuel Out as Phillies Manager 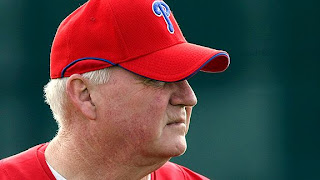 Initially on Friday, the Phillies announced a press conference of an unspecified nature.  Then, news began to leak that Charlie Manuel, would be replaced as skipper of the team he had led throughout their strongest period in organization history.

The beloved 69-year-old took the Phillies to two World Series, winning the team's second ever title in 2008 and losing to the Yankees in 2009.  Unfortunately, the past is just that, and with the team floundering in fourth place in the National League East, 20 1/2 games out, with a 53-67 record, team executives felt that a change was in order.

In nine seasons with the Phils, Manuel notched a 780-636 record in the regular season.

General Manager Ruben Amaro Jr. announced that Manuel was asked to stay on with the Phillies, in some front office capacity and it was said that Manuel accepted that role for the remainder of the season, but Manuel then asserted that he would need to take some time off.  As a result, the immediate future for the man whose career in professional baseball dates back to the 1960's, was unclear.

Manuel did state that he was mad at the change, as it took him out of what he described as "the best seat in the house".

It was also made clear by Amaro that Manuel managed the Phillies' 6-3 loss against the Braves on Wednesday with the knowledge that this move was coming.

Parting words:  "I can not explain to you what the last nine year, or eight and a half or whatever's, meant to me.  I've had some of the greatest times I've ever had in my life.  Philadelphia has been the highlight of my career.  I love everything about the fans, the city.  I talk Phillie baseball everywhere I go.  And I want everything to go out on a very positive attitude and note."

On how Manuel and Amaro came to an agreement to make the change:  "It wasn't arguing...it was relating and communication.  And that's what happened."

On if his removal as manager was his own call:  "I did not resign and I did not quit. I want to tell you something, I never quit nothin' and I didn't resign."

On Sandberg:  "I think he definitely deserves a chance to manage in the major leagues.  I think he'll be a real good manager.  I love everything about him.  I love talking baseball with him."

On his message to the fans:  "Keep coming to the yard, watching the game, loving the game.  And support the Phillies, because I think the Phillies are going to get back to where we were a couple of years ago.  And I think that our fans will definitely stay behind us."


Also, Amaro on the decision and notifying Manuel:  "I wanted to make sure that when the decision was made that Charlie would not be back, that (Charlie) would know.  I didn't see any reason why we should drag it out and let him sit for the next 40 games, knowing that he wasn't going to be the manager beyond this year.  I don't think that was fair to him."

More Amaro:  "My job is to try to think of what we need to do to get better in the future and this is one of those steps to try to move this thing forward."