Lakewood's Watson Shut Down For Season 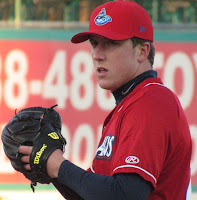 Last year's top Phillies draft pick Shane Watson has been sidelined with shoulder issues since early July. Following an MRI this past week, the Phils have shut down the righty hurler, who turns 20-years-old on Tuesday.

Initially, the time off was prescribed for the Class A Lakewood hurler without an MRI when the he was experiencing shoulder fatigue, following his July 4th start against Greensboro. Now, after having a complete exam and being diagnosed with shoulder inflammation, the six-foot-four 200-pounder will continue to rehab at the Phillies' spring training facility in Clearwater, FL until the fall instructional league begins in September.  Plans are for Watson to take part in "instructs" as an active pitcher, to make up for some innings he'll have missed this season.

Watson is not discouraged by the manner in which his season ended, despite having hoped for another crack at South Atlantic League competition this year.

"I'm not disappointed. I'm really excited to come back stronger than when I left," Watson said on Sunday.

Improvements were made over the course of his abbreviated season, as the youngster who had a 5.25 ERA in his first 11 starts, wrapped up his 2013 campaign with a 3.62 ERA over what ended up being his final five outings.