After Dabbling in Retirement and Hurricane Relief, Catcher Dalles Having a Productive Season 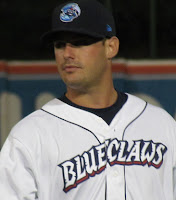 Following four seasons in the minors with the Orioles organization, catcher Justin Dalles called it quits last autumn.  Needing a break from the game, the Florida resident, who was about to turn 24 years old, departed from his pro career in search of some peace of mind and a change of pace.  What he found was a renewed love for the game of baseball and a meaningful dose of reality.

Dalles, a sixth round draft choice of Baltimore in 2009 posted a .229 batting average with 15 homers and 83 RBI in 225 games over four levels of the minors, primarily as a backup.  Drained from the game, the University of South Carolina product headed north from Frederick, MD, home of Baltimore's Class A Advanced affiliate, to stay with a friend on Long Island, not far from where he was born in New York City.

The real world awaited and life away from baseball began with Dalles waiting tables and tending bar at a local establishment.  Then an onslaught of damaging weather struck the region as Hurricane Sandy inflicted damage on thousands of homes along the New York/New Jersey and surround coasts.  An opportunity to help people presented itself, as a friend of Dalles's cousin, who was a plumber involved with repairing many impacted structures all over the area, had job openings available.  The backstop didn't back down from a challenge and began learning a trade with a shot to ease the struggles of hundreds of troubled coastal residents.

"I was pretty much an assistant plumber, working recovery for the hurricane and working any little job, like construction, that I could pick up, doing anything I could," Dalles said.

The unsightly imagery that stood out to Dalles, made an impact on his frame of mind, but also assured him that he was doing good with his time away from the diamond.

"I remember driving through the Rockaways, they were hit hard, and we were working over there a lot," Dalles stated.  "It was so sad to see these houses ruined.  People were in tents outside what had been their house, which was completely destroyed.  But the people we were able to help, the people that had just (limited) damage, being able to help them and get them heat and hot water was pretty cool and they were really thrilled.  I definitely felt a part of helping a community and it was nice.  I was originally born in New York, but I lived in Florida, now being back up here, it was like getting back to my roots."

As the devastation began to turn around, baseball returned to the forefront when a text message from Dalles' agent buzzed through in December.

"The Phillies called my agent and he texted me saying, 'You're going to the Phillies.'  Not even asking me if I wanted to play any more," Dalles explained.

Phillies minor league director of player development Joe Jordan played a big role in bringing the six-foot-two 205-pounder back to baseball.  Jordan, who was previously the Orioles' scouting director that oversaw Dalles's draft, sought out the talented catcher to fill a void with the Phillies.

This season, in the Phils' system, Dalles has bounced around between three levels quite a bit, as is common with reserve catchers.  The youngster has spent time with Class A Lakewood, Triple-A Lehigh Valley and most recently Double-A Reading.  Overall in 24 games, the righty batter has tallied a .313 average with five home runs and 22 RBI.

With some considerably solid offensive numbers, Dalles feels his movement throughout the system this year has been advantageous to his progress.

"I think it's a great opportunity to meet a lot of the players.  This is my first year (with the Phillies).  Get to meet a lot of the coaches, everyone around the organization.  Get to visit a lot of different spots.  I've been to Reading, Lehigh, Lakewood and, obviously, I went to Clearwater for spring training, so I got to see all the complexes and meet all the new people.  But, it's a really good learning experience, especially going up to Double-A and Triple-A and getting to see those guys play".

Pleased with his spot in the organization and refocused, after his role as a healer in the aftermath of last year's horrific storm, Dalles is among the most deeply satisfied reserve players you'll come across through the minors.

"Getting away from the game and not playing baseball for a living it definitely opened my eyes.  (The real world) is always kinda going to be there for me, but, while I'm young, I have the opportunity to play baseball and I am glad it worked out the way it did.  I think everything happens for a reason and stepping away from baseball was probably part of my plan and I'm glad it happened."