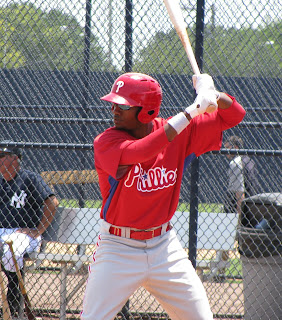 Phillies outfielder Domonic Brown laced three hits including a home run while driving in two runs in a rehab outing for Class A Lakewood on Monday night in Hagerstown.

Brown, who has been sidelined since July 23rd with a concussion, joined the BlueClaws and played all nine innings as the club's left fielder, getting five at bats.

The comfort level seemed to be up for the Phils All-Star as he got off to a great start in the contest, recording all three of his hits in his first three turns at the dish.

Batting in the three hole, Brown stroked an RBI single in the first inning.  He then led off the third inning with a home run.  Two frames later, the Phils' 20th round draft choice from 2006 singled once more.  Brown grounded out to second base to end the 7th.  In the 9th, with the 'Claws trailing 8-4, Brown stepped to the plate with the bases loaded with a chance to keep the team alive, but he grounded out to shortstop for the final out of the game.

The 25-year-old is expected to play one more rehab game on Tuesday with Double-A Reading as they visit Harrisburg.  He'll play all nine innings again there, then rejoin the big league Phillies at home on Wednesday, provided plans don't change.

"If everything works well (on Tuesday), then I should be in the (Phillies') lineup on Wednesday," Brown stated.

Brown expressed excitement being able to rejoin Lakewood hitting coach Greg Legg, who managed the lefty batting slugger with short-season Williamsport in 2007 and coached him with Lakewood in 2008.  Brown credits Legg, who has been in the Phillies' organization for 32 years, with helping him learn the approach to the game that he maintains to this day.

"(He taught me) 'one speed', man.  Play hard!" Brown asserted.  "That's really the philosophy that a lot of the Phillies guys preach.  You know, because when you get to the big leagues, you gotta play hard and if you don't, then pretty much they're gonna run you out."

Brown was injured on a diving play in the outfield in St. Louis, trying to make a catch, he hit his head on the ground.