Biddle Serves Up Homer, Gets Revenge on A-Rod 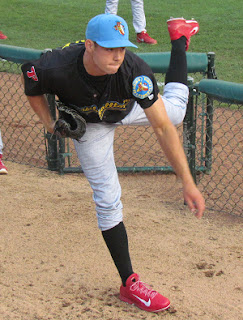 Controversial mega-star Alex Rodriguez continued his "rehab" games in the minor leagues while baseball approaches a decision or announcement regarding the slugger's reported connections to the Biogenesis drug case.  Playing with the Double-A Trenton Thunder on Friday, the Yankees' third baseman faced the Phillies' Double-A affiliate, Reading, and top pitching prospect Jesse Biddle.

The lefty hurler, who was the Phils' 1st round draft pick in 2010, took on the three-time American League Most Valuable Player and admittedly gave a bit too much thought toward the chance to face one of the game's legendary names.

In the first inning, with Reading ahead 1-0, thanks to an Albert Cartwright sacrifice fly, Biddle loaded the bases after a lead-off double by left fielder Ramon Flores and two free passes to Rodriguez and center fielder Slade Heathcott.  The 21-year-old Eastern League All-Star then took a deep breath, knowing that strike outs were ideal in such a spot.  He got three of them in a row to thwart the Thunder threat.

On his effort against Rodriguez, Biddle offered some analysis, confessing why he felt he walked the 14-time All-Star.

"I was just trying too hard," Biddle said.  "I think I see him in the box and I want to strike him out and that's really the only thing I have in my mind.  So, I think I was just forcing it and I walked him."

A-Rod, 38, came back to the plate in the 3rd frame, with the Thunder still trailing.  Following a lead-off single by Flores, Rodriguez slugged a hitter's count fastball from Biddle for a massive blast to left field, out of Arm & Hammer Park, to put Trenton ahead.

"The second time he came up...all of a sudden, I'm 2-0 on him and I've gotta throw him a fastball and I just left it a little bit up and I mean, he's done that how many times in his career?  I just fell victim to something that 500 other pitchers have done before," Biddle stated.

Reading pulled even in the 4th when left fielder Kelly Dugan slapped a single that scored right fielder Zach Collier.  Trenton, though, clapped back in the bottom of the inning and reclaimed the lead on a home run to deep center by designated hitter Kyle Roller to open the home half.  It was Roller's 14th big fly of the season.

For his third and final at bat of the contest, Rodriguez stepped to the plate to lead off the 5th inning and was dismissed on Biddle's sweet, sweeping curve ball.

"The third time he came up, I threw my stuff and I threw what I had against him and I had success. At the same time, it kind of gives me a little motivation and a little confidence," Biddle said, glad that he went out on a high note.

(To see footage of the A-Rod's second and third at bats against Biddle, click here.)

Before the game was done, Trenton added three runs against Reading reliever Hector Neris as he surrendered four hits and a walk in the bottom of the 7th.  Trenton went on to lock down a 6-2 victory thank to A-Rod, Roller and three shut out innings from their bullpen.

Former Phillies pitcher David Herndon tossed two scoreless frames for the winners.  The 27-year-old appeared in 97 games with the Phils from 2010-2012 and was claimed off waivers by the Yankees last fall, despite undergoing Tommy John Surgery earlier in the year.  Herndon is now trying to work his way back to the majors. 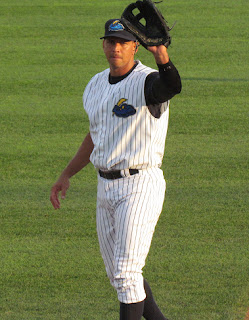 Rodriguez, who has missed time this year following hip surgery and while dealing with a quadriceps issue, could face a lengthy suspension over the well-publicized performance enhancing drug scandal.

Biddle was clear in stating that negative news ties aside, he respects the career that Rodriguez has had.

"To me...all the steroids and whatever put aside, the guy has 647 home runs in the big leagues and he is one of the greatest players to ever play the game and I have tremendous respect for everything he's done on the baseball field and I really walk out of here learning a lot and just kind of-- it was really a fun time to pitch against him and it's something I'm really honored to do," Biddle stated.

On Saturday, A-Rod will be in the Trenton lineup once again, as he faces right-hander Brody Colvin (3-2, 6.39 ERA), who returns to the Fightin' Phils rotation after his second stint of the season in the team's bullpen.  He'll be opposed by righty Graham Stoneburner. (0-1, 3.86 ERA), who will be making his first start for Trenton this year, after appearing exclusively in relief thus far at the Double-A level.