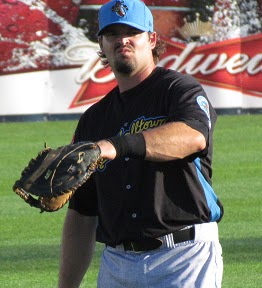 With the Phillies' decision to try Double-A third base prospect Maikel Franco at first base recently a bit of a dilemma with how to use slugger Jim Murphy arose.  The 27-year-old Eastern League All-Star has held down first base at several levels of the minors since he was drafted by the Phillies out of Washington State University in 2008.

Murphy, who is among the league leaders in home runs (22) and RBI (81) was without a spot in the Reading Fightin Phillies' lineup against National League affiliated opponents down the stretch, as teams do not use a designated hitter in those match ups.

Some luck came Murphy's way this week when a lineup spot abruptly vacated by outfielder Kelly Dugan, who was a late scratch on Tuesday, left an opening for Murphy.  The righty batter has never given up on his dreams of climbing all the way up the developmental ladder, despite seemingly being provided with limited opportunities at times.

"The Phillies want Franco to get some games in at first and (manager Dusty Wathan) wanted me to stay in the lineup for National League games, so I worked out there for a few days," Murphy stated.  "Don't know what the future will hold for me in the outfield but it would add value to myself to have a secondary position. It was fun to be out there."

The six-foot-three 255-pounder is a career .268 hitter with an .810 OPS in 679 professional games, one of which was played in the outfield prior to this week.

Murphy got five at bats in spring training with the Phillies back in 2011 and has steadily been striving to get back for another taste of action at the top level of the sport.  A bit of a long shot to be a September call up with the Phils, once the major league rosters expand for the final month of the season, Murphy's production and new found versatility might make for good reasoning for him to finally get that shot in the big show.