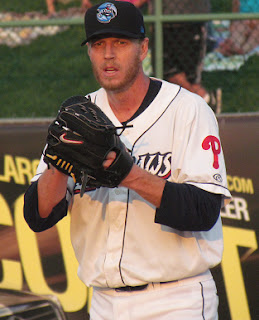 Righty hurler Roy Halladay, who was slated to appear in another rehab outing for Double-A Reading on Sunday will return to the big league club instead, following a marathon of baseball Saturday night at Citizens Bank Park.

In Saturday night's (Sunday morning's?) 12-7 defeat at the hands of the Diamondbacks, the Phillies sent nine pitchers and two position players to the mound to make it through the lengthy affair. Starter Ethan Martin could not escape the opening frame, as he allowed three hits, three walks and three earned runs. Over the 4 2/3 innings that followed, Luis Garcia and Zach Miner allowed a combined four earned runs. The remainder of the relief corps including Cesar Jimenez, Justin De Fratus, Jonathan Papelbon, Jake Diekman and B.J Rosenberg combined for 6 2/3 scoreless innings while Sunday's originally scheduled starter Tyler Cloyd was called upon to toss five scoreless frames.

As the need to use Cloyd approached, the Phillies dugout got in touch with general manager Ruben Amaro Jr. to consult him on the possibility of having Halladay return to Philly, instead of taking the mound in Reading on Sunday.  The GM obliged and Cloyd was used in relief to begin the 12th inning with no end in sight.

In Halladay's most recent rehab effort on Tuesday, the 36-year-old, who has been out of action since May following shoulder surgery, allowed seven hits while striking out four and walking three in six innings for Class A Lakewood. He threw 90 pitches, 52 of which were strikes, in that effort and gave up two runs, although only one was earned.

In his nightly press conference Phils manager Ryne Sandberg confirmed that with the taxed bullpen, the team anticipated adding a rested relief pitcher to the mix on Sunday prior to the team's 1:35 PM series finale against Arizona. Cloyd, who threw 91 pitches, and Rosenberg, who pitched three straight days, are the likely candidates to be demoted.

Out of arms, the Phillies resorted to using Casper Wells, who started the game in right field, to pitch the 18th inning. The right-hander yielded five runs after retiring the first two batters he faced. Utility man John McDonald was called upon to close out the inning.

Wells, who took the loss, registered 90-91 MPH regularly in the stadium radar gun, which is velocity that would be welcome for Halladay on Sunday, as he was mainly clocked at 87 MPH in Lakewood last week.

At seven hours and six minutes, Saturday's game was the longest in Phillies history. The two clubs combined to use 20 pitchers, tying the big league record.

Darin Ruf slammed his ninth homer of the month on Saturday, which is tops in the National League for August.

Righty hurler J.C. Ramirez has a 0.00 ERA in seven outings (11 2/3 innings) since returning to Triple-A Lehigh Valley.  The 25-year-old threw one inning on Saturday, his first outing since August 19th.