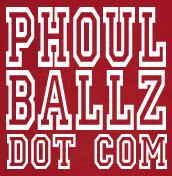 Recently, I posted a feature on former Phillies pitching prospect Trevor May, but that piece couldn't fit all of the quotes I had from the man that was traded last off-season along with Vance Worley for outfielder Ben Revere.

Click HERE for that article on May and read ahead for the additional  interview excerpts.

He's a freak. (laughter)  He can hit the ball really far and he's made some absolutely ridiculous plays at third base and he's a character, just a big kid, an absolute child.  And I'm just gonna throw the other big prospect Meyer, he's just a big kid too.  And let's be honest, I'm a big kid too, so it's a lot of fun to kind of all be together, especially on this team.  I'm glad he can come up here and do as well as he's done, because he's a guy...if I achieve my ultimate goal of reaching the big leagues, he's a guy I want playing third base in the big leagues with me and hitting 40 home runs a year.  It's exciting, as a guy that wants him to eventually be in his lineup and playing behind him in the field, to see the kind of things he does.  He does some amazing stuff.

In spring training we hung out all the time. Me, him and Alex Meyer in the bullpen all the time for the big games.

I talked to him a little bit after the draft, but he went straight to Low-A and I went to GCL and he was always one or two levels ahead of me. I was never on the same team as him. And then he got to the big leagues and I was a Double-A guy...so we never really got to talk that much. But having a little bit more in common, we have similar taste in music too.

It's so funny, when I was 19 and I used to look at 23, 24 year olds and think, "He's been around!" And they'd always talk about guys they played with in the past and ask if I knew who they were and I was like, "I'm 19. No!" Now I'm the guy who's like, "Yeah, I played with him in 2008." And they talk about D'Arby Myers has a 30-game hit streak and I tell them, "I played with D'Arby for four years!" And my roommates says, "Jeez, you've been playing for a while!" This is my sixth year and my roommate was drafted last year and he's a year younger than me. You know, it's part of playing I guess. It's fun.


- On Ben Revere, who came to the Phillies in that swap with the Twins-

(The Twins) traded a guy that he was their guy. They love Ben over there. All the fans love him. He's a great guy. I've never met him, but, besides from a tweet after the trade. I follow him on Twitter. I think he's a very nice guy and he's funny and likes to have fun.

It's a great competitive atmosphere. I never went to big league camp with the Phillies, but I'm sure it's the same over there.

It was pretty crazy being in the same club house as Justin Morneau and Joe Mauer, but they're just guys. And it was incredibly welcoming and fun. It was nice to get in, I got in, like, five games and got to throw to some hitters, even though it was against the Phillies.


- On how New Britain compares to Reading-

The towns are very similar to be honest. Industrial areas, blue collar towns. The people who do come to the games, the super fans, season ticket holders, you wouldn't find any differences, except for there's no Adam Briscoe. That's the only difference. That atmosphere is very much the same and we get really good crowds too. They don't do quite as many promotions and we don't have 26 mascots (like Reading does), but they do a great job in Reading. New Britain's added a lot of stuff this year too, but they're more Rock Cats fans than actual Twins fans. And in Reading you're gonna get fans that are mainly coming because they're gonna get to see guys like Biddle and Franco and all those guys, because they're gonna be up (with the big league team).