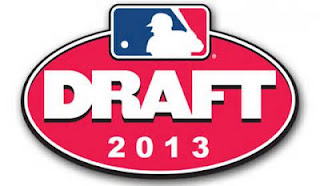 Offense was the primary focus early in this year's draft for the Phillies.  With their each of their first five selections and eight of 11 picks to start the draft focused on position players, the Phillies seem to be realizing that the core of home grown talent that helped the team achieve all of their success in recent years is aging and the time has come to focus on filling voids that players like Chase Utley, Carlos Ruiz, Jimmy Rollins and Ryan Howard will inevitably leave.

As we previously reviewed, the Phils selected high school shortstop J.P. Crawford and college catcher Andrew Knapp in the opening night of the annual draft on Thursday.

In the 3rd round of the draft on Friday, the Phillies went back to their usual style of drafting, picking a "toolsy" position player when they selected outfielder Cord Sandberg with the 89th pick.  The 6-foot-3 215-pounder is a product of Manatee High School in Florida, where he was the quarterback for the school's football team.  Sandberg is committed to play football at Mississippi State.

A lack of clarity of whether or not he's willing to walk away from the gridiron and fully commit to signing to play baseball is said to have dropped Sandberg's place in the draft, as he was projected by some to be worthy of a 1st round selection.

The lefty batting youngster batted .418 in his senior season this year.  He has an athletic frame that is compared to Josh Hamilton and is a line drive-gap hitter with very good power potential.  With solid speed, Sandberg, 18, projects to be a good defender.

In a bit of a surprise, Sandberg wasted no time coming to terms with the Phillies almost immediately.  Reports have him signing for an amount that is a bit higher than slot money, at $775,000.

Sandberg is no relation to Phillies coach Ryne Sandberg, who also had a scholarship to play quarterback in college, but Cord's father Chuck played three years in the minors before his career was ended by injury.

With the 96th pick, the Phillies chose shortstop Jan Hernandez out of the Carlos Beltran Baseball Academy in Puerto Rico.  The 6-foot-1 195-pounder already has a strong frame and could develop more physical strength as he matures.  Hernandez sports enough offensive potential that scouts see him possibly being a middle-of-the-order type guy.  On the defensive side, scouting reports praise his hands and his arm.  He also projects to possibly switch to third base in the future as well.

After taking a catcher with their second selection in the draft, the Phillies grabbed another backstop just two rounds later with the 121st pick, as they took Jake Sweaney out of Garces Memorial High School in California.  Sweaney, a 6-foot-3 180 pounder, is another two-sport talent, as he lettered in football as a wide receiver/defensive back.  The right-handed hitting 18-year-old is committed to Oregon in the autumn.

Lefty pitcher Ben Wetzler was chosen by the Phillies with the 151st pick out of Oregon State.  The 6-foot-1 210-pounder sports a repertoire of fastball (90 MPH), slider and change up.  The 21-year-old is praised for his command and is aggressive on the mound. In 14 starts this season for the Beavers, Wetzler tallied an 8-1 record with a 1.98 ERA.

Washington State outfielder Jason Monda was taken by the Phils in the 6th round with the 181st pick.  The 6-foot-4 205-pounder hits for average and could increase his power as he matures.  This season in 54 games with the Cougars, Monda batted .294 with seven homers and 40 RBI.  In college, Monda played center field, but might be best suited for a corner outfield spot as a pro.

The 7th round saw the Phils take Trey Williams, a third baseman out of the College of the Canyons (JuCo) in California.  Williams was a first year college player that was drafted in the 12th round last June by St. Louis and did not sign.  The righty batting 19-year-old is the son of former big leaguer Eddie Williams.

Justin Parr, an outfielder from the University of Illinois, was taken by the Phillies in the 8th round.  The lefty batting 22-year-old was named Big Ten player of the year, as he batted .290 with three home runs and 38 RBI in 53 games this season for the Illini as a senior.  His twin brother Jordan was also drafted this year, in the 15th round by Arizona, the same team that drafted another Parr brother, Josh, two years ago.

Also of note, a familiar name Mark Leiter Jr., a New Jersey native, was selected in the 23rd round by the Phils.  Lieter's dad Mark Sr. pitched for the Phillies in the late 1990's.  "Little Light", as he is known, posted a 4-9 record along with a 4.94 ERA in his senior season for the New Jersey Institute of Technology this year.  The righty hurler plans to fly to the Phils' spring training facility in Clearwater soon to undergo a physical and sign his first pro contract in the coming days.  Seniors don't quite have the negotiating power that a college junior or high school player might hold, with the option to return to school.

MLB.com's Draft Tracker has a full list of the organization's picks.

Check out batting practice and game footage of Cord Sandberg in the media player below...

Check out a video package on Jan Hernandez in the media player below...

Check out footage of Jake Sweaney in the media player below...

Check out lefty Ben Wetzler footage in the media player below...