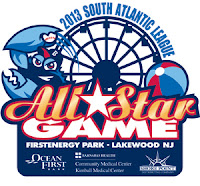 When the Class A Lakewood BlueClaws host the South Atlantic League All-Star game on Tuesday night, the club will be represented by four players on the North division roster.  Initially, just catcher Chace Numata and pitcher Steven Inch were selected as All-Stars, but due to other pitchers' availability, two more BlueClaws hurlers were selected to represent the resident team in the game with lefty Yoel Mecias and right-hander Delvi Francisco now selected to fill voids on the roster.

The North division team will also include Lakewood manager and former Phillies All-Star Mickey Morandini, who will serve as a coach.

"It's fun.  It's always exciting when you get to host an All-Star game.  I know the organization here has really worked hard to do as much as they can for everybody coming in, with the events going on, so my hat's off to all the people that have busted their butt to make this thing happen," Morandini stated.

Williams, who is most famous for his time with the 1993 National League Champion Phils, wasn't concerned with the competition he had to face in the hitting challenge, but he was a little envious of the First Energy Park facility today's Class A Phillies players get to enjoy.

"These kids are so spoiled, it's not even funny.  You should have seen the goat pastures I played on.  They've done a really good job here," Williams stated while perched in the comfort of Lakewood's home locker room.

The hitting challenge event pitted two teams of celebrities and SAL All-Stars against each other, with the South team, led by Charleston (Yankees) catcher Peter O'Brien, winning by a score of 1835-1810.

Prior to Tuesday's game, which gets started at 7:05 PM at FirstEnergy Park, All-Stars along with visiting family members as well as league and team employees will take part in a community outreach as part of local "Restore the Shore" efforts.

BlueClaws hurler Colin Kleven was the winning pitcher in last year's contest as the North was victorious, 3-2.