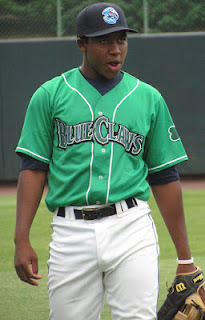 Left-handed pitcher Jesse Biddle and third baseman Maikel Franco were named as the Phillies' representatives at the MLB All-Star Futures Game set to be played on July 14th at New York's Citi Field.  Biddle, the Phils' top draft choice from 2010, will play for the United States team while the Dominican born Franco will be a member of the World team.

Bidde, 21, sports a 3-7 record with a 3.21 ERA with two complete games, a 10.07 K/9 mark and a .189 batting average against through 15 starts with Double-A Reading this season.  Biddle, who was also named an Eastern League All-Star on Wednesday, began the season at a torrid pace, tallying a 1.74 ERA in five April starts, but he has slipped since that time as he has posted a 4.11 mark in his last 10 outings.

Franco, 20, was promoted to Double-A last week after the young slugger mashed Class A Advanced Florida State League opposition to the tune of a .299/.349/.576 line.  Thus far in seven games with Reading, the righty hitter has gone 14-for-29 (.483 avg) with a double, a triple, three home runs and seven RBI.

Biddle and Franco were ranked 1st and 4th respectively in this year's prospect rankings by PhilliesNation.com.

Last year the Phillies sent two Reading hurlers to the annual minor league showcase played each year on the Sunday just prior to the All-Star break. Righty pitcher Lisalverto Bonilla, who was dealt to Texas as part of the Michael Young trade last off-season, injured himself at the team hotel in Kansas City last year and missed considerable time following his failure to appeare in the game.  Bonilla has posted a 5-5 record with an 8.14 ERA in 25 games for Triple-A Round Rock.  Another right-hander Julio Rodriguez, who was dealt this spring for minor league outfielder Ronnie Welty who lasted 15 games in the Phils organization before he was released, recently began an injury rehab assignment with Baltimore's Gulf Coast League team making his first appearance since the opening week of the regular season.  Rodriguez served up a damaging homer in last year's contest.

Additionally, for Reading, first baseman Jim Murphy (.297 avg, 15 HR, 47 RBI) and second baseman Albert Cartwright (.248 avg, 4 HR, 20 RBI) were also named as Eastern League All-Stars.  Murphy, 27, was the Phils' 17th round draft pick out of Washington State University in 2008.  The 25-year-old Cartwright was acquired from Houston prior to the 2011 season, in a trade for Sergio Escalona.