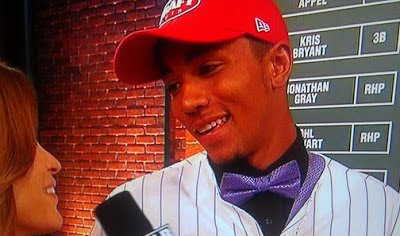 The Phillies took another player out of Lakewood High School with their first pick in the MLB amateur draft on Thursday night.  J.P. Crawford became the third player taken by the Phils from the southern California school with an early round pick in the past seven seasons.  Last year, righty pitcher Shane Watson, who played with Crawford since both prospects were very young, was taken by the Phils with their first pick, 40th overall.  Watson's older brother Scotty played with the other of the Phils' Lakewood High draft picks, Travis d'Arnaud.

Crawford, a lefty batting shortstop, is highly touted and is said to have tremendous defensive abilities at his position with exceptional range and a strong arm.  The 18-year-old hit .432 in 25 games in his senior season this year and is his school's all-time leader in hits and runs scored.  Offensively, he has a high ceiling, but does not project to hit for great power.

The youngster is a cousin of Dodgers outfielder Carl Crawford. Additionally, his father Larry played professional football in Canada.

The 6-foot-2 175-pounder is committed to playing college ball at the University of Southern California on a full-ride scholarship, but according to Phillies assistant general manager in charge of amateur scouting Marti Wolever, as told to CSNPhilly.com, Crawford is ready to sign his first pro contract.

"All indications are that he’s ready to start his professional career, but that’s a difficult decision to make,” Wolever said. “Southern Cal is a great option for him to have, but as far as development goes, I think what we have to offer is a leg up on what he might entertain by going to school."

And when gauging how likely a player is to sign, it's important to keep in mind that while a full scholarship is not something to scoff at, that it is standard for contracts of high school draft choices to include full college tuition paid at a time of the signee's choosing over a four-year period.

Crawford was selected 16th overall by the Phillies with their highest pick since they took Gavin Floyd with the 4th pick in 2001.

Also drafted on Thursday by the Phillies was catcher Andrew Knapp.  The 21-year-old is a University of California product and led the Golden Bears in batting average this year with a .350 mark, and slammed eight homers with 41 RBI.

The lefty hitting Knapp is not related to righty hurler Jason Knapp, who was the Phils' 2nd round selection back in 2008 and ended up being a key trade chip when the Phillies acquired Cliff Lee from the Indians.

I suppose there's not much wrong with taking the best player available, but if there is one position the Phils don't need more depth in, it's catcher.  With currently injured 21-year-old Tommy Joseph, 22-year-old walking trade bait Sebastian Valle and emerging 23-year-old Cameron Rupp all making progress at the upper levels of the organization's developmental ranks, this early draft spot could have been better used.

A sampling of Crawford's on-field skills can be viewed in the media player below.

Batting practice and game hitting footage of Knapp can be seen in the media player below.