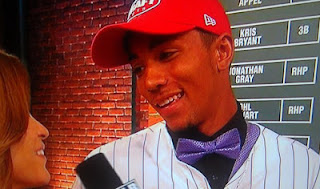 Thanks to a picture that was tweeted and soon deleted by J.P. Crawford's sister Eliza, we caught a quick glimpse of the Phillies' top draft pick signing his first professional contract today.

Crawford, 18, was selected 16th overall out of Lakewood (CA) High School less than two weeks ago by the Phillies.  The youngster enjoyed his high school graduation late last week, then took off to begin his life as a pro ball player, flying into Philadelphia on Monday.  Crawford met with team officials and put ink to paper on Tuesday afternoon shortly after 1 PM.

The lefty batting shortstop, has been highly touted throughout his high school years and is said to have great defensive range and a strong arm.  Crawford hit .432 in 25 games in his senior season this year and is his school's all-time leader in hits and runs scored.

If the weather holds off in Philadelphia, Crawford could join the Phillies for batting practice at Citizens Bank Park in the afternoon.

This year's selection by the Phillies was the highest they've drafted since 2001, when they took Gavin Floyd 4th overall.