Minors Notes: Franco, Susdorf, Green and Others Heat Up

By Jay Floyd June 24, 2013
From all throughout the Phillies' developmental ranks, here's our weekly rundown of top performers and those players that haven't done much as of late.

First baseman Josh Fields has five multi-hit games in his last seven contests.  The 30-year-old is 10-for-25 (.400 avg) during that stretch.  Overall this season, Fields, who was signed as a minor league free agent last November, is batting .316 with four homers and 26 RBI this year.

Infielder Pete Orr is 3-for-23 (.130 avg) with two doubles in his last seven games.  Orr, who has spent time in the big leagues with the Phillies in each of the past two seasons, is batting .231 with three home runs and 17 RBI in 54 games with the IronPigs this season. 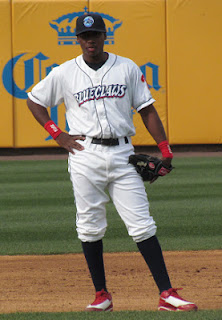 Third baseman Maikel Franco is 8-for-17 (.471 avg) with a triple and two home runs since making his Double-A debut on Thursday.  The 20-year-old Dominican posted a .299 average with 16 homers and 52 RBI in 66 games with Clearwater prior to his promotion.

Second baseman Albert Cartwright is 2-for-20 (.100 avg) over his last six games.  The righty hitting 24-year-old is batting .250 with four homers and 20 RBI in 65 games this season.  Cartwright was acquired in 2011 from Houston in a trade for Sergio Escalona.

First baseman/third baseman Harold Martinez is 10-for-35 (.286 avg) over his last nine games.  Prior to this successful streak, Martinez was batting .189 through his first 28 games this year. The 23-year-old was the Phils' 2nd round draft pick in 2011 out of the University of Miami. 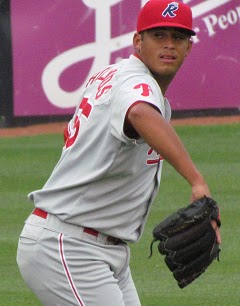 24-year-old lefty Mario Hollands threw eight scoreless frames for Clearwater for a no decision on Sunday.  In his last three starts, the University of California Santa Barbara product, has allowed one earned run in 20 innings (0.45 ERA).  Overall, the Phils' 10th round pick from 2010 is 4-0 with a 1.53 ERA in 11 outings for the Threshers, although he had a 7.20 ERA in three outings for Reading this year.

Willie Carmona's 10-game hitting streak was ended with an 0-for-4 effort on Sunday, but during his hot stretch, the first baseman/third baseman/designated hitter went 17-for-34 with four doubles, a homer and 10 RBI.  Overall this year, the 22-year-old who was drafted in the 11th round last year out of Stony Brook University, is batting .290 with two home runs and 28 RBI.

Shortstop Roman Quinn is struggling mightily over the past week, having gone 3-for-28 (.107 avg) with one RBI and two runs scored in his last seven games.   The Phillies' 2nd round draft pick from 2011 is batting .238 with five homers and 31 steals in 66 games this season.  Quinn has also tallied 31 errors on defense this season.

All-Star catcher Chace Numata is batting .147 with two doubles and six RBI in his last 10 games.  The Hawaiian native was the Phils' 14th round draft selection in 2010 out of Pearl City High School. 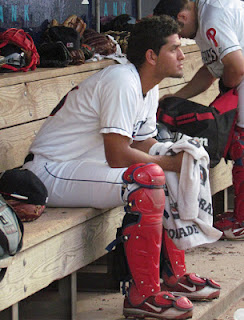 Catcher Gabriel Lino is 9-for-27 (.333 avg) with a homer and seven RBI through seven games.  The 20-year-old was acquired as part of the Jim Thome trade with Baltimore last year.  Lino has also manned first base twice in the early going, for the Cutters.

Second baseman Andrew Pullin has gone 4-for-27 (.148 avg) with a double and a triple through six games.  The 19-year-old Washington state native was a 5th round draft selection last year out of Centralia High School.

Third baseman Deiber Olivera is 15-for-33 (.455 avg) with four doubles, four RBI and three steals in eight games.  The 20-year-old righty hitter played in the Venezuelan Summer League in each of the past two years, batting .335 with one homer and 36 RBI in 71 total contests.

Righty pitcher Gregorio Santos threw a complete game, allowing one run while earning a win in his latest outing on Saturday. Through four games, the 20-year-old is 3-0 with a 1.61 ERA while striking out 18 and walking three in 28 innings.

Left-handed hurler Jesus Chavez has allowed one earned run over his last five starts, posting a 0.31 ERA during that stretch.  Overall, the 19-year-old is 4-0 with a 2.37 ERA and 9.0 K/9 in seven games this season.  Chavez was signed in April of last year and appeared in just two VSL games in 2012.