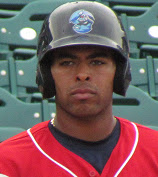 Acquired by the Phillies during spring training in a trade with Toronto, first baseman Art Charles welcomed the change and is happy to be a part of the Phils organization.  The six-foot-six 225 pounder was originally drafted by the Blue Jays in the 20th round in 2010 out of Bakersfield College.  Now, the 22-year-old bats cleanup for Class A Lakewood BlueClaws.

Through 19 games this season, Charles is batting .275 with five doubles, two homers and 12 RBI.

Charles was named the Phillies minor league player of the week for April 15th through the 21st, as he batted .423 with a home run and six RBI in seven games played.

I recently spoke with Art about the trade, his work to improve his hitting approach and plenty more.  Read ahead for that full interview.


- During spring training, of course, your were swapped by the Blue Jays for reliever Michael Schwimer.  How were you notified of the deal and what was your reaction?

I had talked to the Blue Jays prior and they had scheduled me for a doctors appointment, I think it was a check up, they have us do our physicals and what not, this is on Saturday.  And I was like, "Alright, sounds good.  I'll be able to get a ride over to the doctors appointment and what not."  And then later on, maybe like three, four hours later, I got called and notified of the trade, so I was a little shocked.  Like, "Oh, I just talked to you guys..."  So, it was kind of shocking.  And didn't know all the details about the trade and they kind of told me a little about it and after a while I realized that this was a good thing.  This is a good thing for me and my career and it's just one of those experiences you go through that's kind of a shocker at first, then as it sinks in, you start thinking about it and it kind of mellows out a little bit.


It must have been an easy transition for you to go from Dunedin to nearby Clearwater, though, right?

Yeah, it wasn't too far away.  I think it's like ten minutes.  It wasn't like I was going three hours away.  I knew the area still and I remembered seeing some of the Phillies guys walking around and stuff.  It wasn't a bad transition at all and they made me feel at home.


- Did you notice any key differences between the two organizations?


- What were some of your best memories from your time with the Blue Jays?

Obviously, being drafted and just going into that professional atmosphere.  My first spring training was one of my memories that will stick with me for all times, you know.  Winning...I had a walk-off home run that was a big win, it was one of the highlights of my career, and we actually won the Northwest League championship last year, so that was the best baseball moment and the best three baseball games I've probably ever been a part of.  That was with the Vancouver Canadians.


- A lot of folks haven't seen you play yet, so if I was to ask you to scout yourself, for the fans, what would you say?

I mean, I have pretty good power.  I'm pretty much a power hitter, left handed guy, I bring some pop into the lineup.  I can spray the ball to all fields pretty well, for power.  And defensively, I'm pretty good as well.  I mean, I worked on it a lot.  I wasn't always good on defense right away.  Same thing as hitting.  It all came over time and hard work is paying off.

I worked pretty hard this off-season, you know, as far as shortening up my stride and my load, and everything.  When I got in spring training with the Phillies, we talked about being softer on my front foot, when I land.  So, all those things that they've kind of worked with me as well, as far as getting my load, and the kind of things they've worked on with me and the Blue Jays worked on with me, I'm kind of meshing them all together, you know what I mean?  And it became really good.  Obviously, I'm going to have my strike outs, being a power guy, but definitely limiting those would help me become more consistent.


- Who were some players you looked up to as a youngster, before turning pro?

I always watched Big Papi, you know what I mean? And Barry Bonds...I loved watching him play.  I also, when I was drafted actually, I was watching Ryan Howard a lot.  I really like Ryan Howard and Adrian Gonzalez and some other first baseman and left handed power hitting guys.


- Do you have any pregame rituals or superstitions?

Lately, I always listen to music before the games to kind of get in my zone and visualize my at bats or visualize what I'm going to do in the game.  Nothing really specific (on the playlists), just however I'm feeling.  Today I might just mellow out and maybe have some reggae today.  Just kind of get the good vibes.  I also listen to this guy, Eric Thomas, he's one of those really inspirational speakers.  So, I've been listening to his tapes and the things he says to get the stuff that he has and it's really good.  It gets me in that warrior mindset that lets me know, "Don't worry about what happened yesterday or the day before.  It's all about what's going on today and nothing can stop you."  That's kind of my mindset.