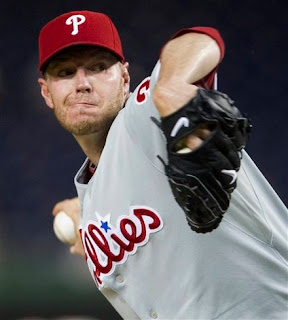 After a loss to the Braves at Atlanta's Turner Field on Monday, the Phillies will turn to right-hander Roy Halladay to help the team notch its first win of the new season.  For Halladay, though, more focus may be on proving he can bounce back from a difficult spring (6.06 ERA, .323 batting average against, in six outings) and an even worse 2012 campaign that saw him not only dealing with performance issues, but an ailing body as well.

Beginning in May last year, Halladay missed roughly seven weeks due to a strained right lat muscle.  The physical concerns led to a ballooned ERA that nearly double itself from the previous season (from 2.35 to 4.49).

Additionally, Halladay has struggled against Atlanta, having not recorded a victory over the Braves since September, 2010.

Trying to continue their winning ways, the Braves will counter with lefty Paul Maholm, who was acquired by Atlanta in a trade with the Cubs last July.

Read ahead for details on the pitching match ups and more for this series.

Michael Young has a .271 average with seven RBI in 16 career games against Atlanta.

Dan Uggla has 26 homers, 74 RBI and a .233 batting average in 124 games against the Phillies.  Uggla is a combined 1-for-13 against Mike Adams, Phillippe Aumont, Antonio Bastardo and Jonathan Papelbon in his career.

In 21 contests against the Phillies in his career, closer Craig Kimbrel has 10 saves with a 1.40 ERA.  Kimbrel has a 1.07 ERA in 34 career regular season outings at Turner Field.