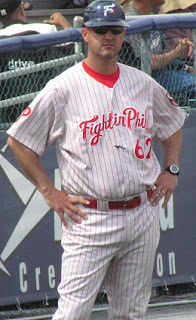 In his second year with the team, former pro catcher Dusty Wathan has led the Double-A Reading Fightin Phillies to a 12-10 record thus far in the early going.

After his 14-year playing career, Wathan began the next leg of his career, managing, with the short-season Williamsport Crosscutters in the Phillies organization in 2008. Since then, the son of former Royals manager John Wathan has climbed up the Philadelphia developmental ranks, making stops with Class A Lakewood, Class A Advanced Clearwater and, of course, Reading.

As a player, Wathan was signed by Seattle in 1994 and went on to compete in the Florida, Milwaukee, Cleveland, Kansas City and Philadelphia organizations. With the Royals, Wathan appeared in three big league games in 2002.

This week, I sat down with Dusty to discuss the collection of well-regarded talent on his roster including top prospect Jesse Biddle, catcher Sebastian Valle, outfielders Anthony Hewitt and Zach Collier, plus plenty more. Read ahead for that full interview.


- Jesse Biddle is a guy that drives great interest from the fans at this point. Clearly, he's always been very well touted, but the dominance he has shown with the strike outs and the batting average against, is that surprising at all to you?

Well, I don't know about batting average against, but I know what his batting average is...he can swing the bat too! He's been outstanding. He works as hard, if not harder, than any other starting pitcher I've ever seen. I mean, I tell these guys, you reap what you sow. And I'll tell you what, he's getting the rewards for it right now. He goes after it as hard as anybody and everything he gets is well deserved. He's got the ability to go with the hard work. A lot of guys don't have the ability that he has and he's got the ability to throw four pitches and be a good major leaguer.


- In the time I have covered this system, the only guy I can recall being on this team and a lot of people wondered this about was Kyle Drabek...when there's chat about a jump to the majors...if that call came, do you think he's ready? Do you think Jesse would think he's ready?

I think Jesse would think he's ready. I don't think he's ready. He's got more stuff to work on. Any player- he better say he's ready, because they better think they're ready. But, we, as player development and front office and stuff, we know when they're ready. You know, with the guys that are ahead of him, the guys that are in Lehigh Valley, there's still things Jesse needs to work on. He's a young guy. There's no need to rush him. He's gonna have a long career in the big leagues and I think where he is right now is the perfect place for him.

He's done a great job. He's a guy that, you know, we knew that he could play defense. He had a pretty good year with the bat, last year, and earned his way up here. He started off well. Maybe struggling a bit the last couple days, but he's been solid for us up the middle. Both guys have been, really, so I'm really happy with how things are going with Edgar right now.


- In an effort to get him in the lineup, Sebastian Valle played a game in the outfield, when your club faced a National League affiliate and didn't have the designated hitter. Not a big change, as he's played some outfield in the Mexican Winter League to save his knees, but is that something that could potentially become a more regular or permanent switch for him?

No, I don't think it'll be a permanent switch. The catching position is too important, it's too valuable to be a catcher. And I think it's just way to get his bat- when we play National League games, to get at bats. It gives us a little versatility to get his bat in the lineup, so he's not sitting two or three days in a row. I'm trying not to. Sometimes, it's gonna happen with two catchers, but it's just a way to get him some more at bats, I think.


- Zach Collier and Anthony Hewitt are a couple of guys who were high draft picks and are now in the lineup for this club. Hewitt started out real hot and cooled off, while Collier started slow and has picked it up. What are your thoughts on those guys?

I think Hewitt's a guy we've talked about a lot. He's a guy that has all the ability in the world and we just have to get him to put it together on the field and hopefully, this year, it clicks. For some guys, it takes a little longer. You know, he can hit a ball as far as anyone else and run as fast, if not faster, than anyone else. He's a very special athlete and sometimes it takes a while for an athlete to turn that into baseball and right now I see him doing that.

And Collier, he had a tremendous Fall League with me and I see him really starting to come on here. He struggled early, but the great thing about Zach is he's been through a lot of things, not only in his baseball career, but in his life. He's handling this very well. I mean, he's- the thing a look for is a guy that feels sorry for himself and he doesn't feel sorry for himself. He's starting to hit and he's not having the best luck right now. He's hitting balls hard. So, I'm not worried about him at all. I think, sometimes, struggles are the best thing to happen to a young player because it's easy to do everything the right way when things are going well, when you're having a difficult time, that's when the spotlight gets put on you and he's handling it great.


- Jim Murphy's a guy that produces at every level. People speculate what his ceiling is and some say maybe his future is as a coach. What are your thoughts on Jim being a performer at every level and with you here at Reading?

I think, you know, he's a guy that wasn't signed as a prospect and you don't read about his name everywhere, but he's a guy that is very important to this organization, to this team. He hits in the middle of the lineup everywhere he is. He drives in runs somehow. He's a tremendous leader and guys like to follow his lead and he works hard. The sky's the limit. You never know what's gonna happen. Last year, Darin Ruf- no one would have said he'd be playing in the big leagues, when we sat here at the beginning of the year, last year. Anything can happen. These guys' destiny is in their hands and he has the opportunity to do something. Whether that's making it to the big leagues or that's to be a coach, I don't know. But, right now, he's doing a tremendous job in the middle of our lineup. And his window isn't as big as a guy who is a quote-unquote big prospect, but there's definitely a window there every time you have a uniform on.


- Have there been any pleasant surprises for you on the roster, performance wise, here in April?

There's been...a lot of guys have done well. (Albert) Cartwright has done well this month. You know, after missing a full year, two years ago, trying to come back from his Achilles injury, I think last year, he might tell you he was 100%, but I think it takes quite a while to come back from that injury, not physically, but mentally to trust it. That's a shocking injury when all of a sudden that thing pops. He's done a really nice job playing second base and he's hitting well too, but I really like the way he's played second base. And Tyler Henson's been a nice pick up for us over the off-season. He's only 25-years-old. He plays a bunch of positions and he's done a nice job at third base for us here.