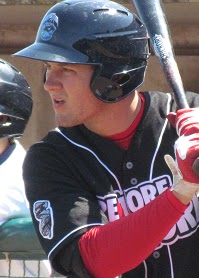 Phillies 5th round draft choice from 2011, Mitch Walding, is off to a solid start to the regular season this year with the Class A Lakewood BlueClaws.  Walding, a 3rd baseman, has gone 9-for-28 (.321 avg) with two doubles and six RBI through eight games thus far against South Atlantic League competition.

The lefty batting Lodi, CA native made his pro debut last season with the short-season Class A Williamsport Crosscutters, posting a .233 batting average along with 10 doubles, three triples, a homer and 31 RBI in 69 games.

After playing in the Florida Instructional League last year as well, the six-foot-three 190-pounder came into spring training this year, ready to make an impact and made his full season team debut last week.

I spoke with the 20-year-old Walding recently about his his draft experience, his time as a pro thus far and plenty more.  Read ahead to check out the full interview.


- In 2011, you were a 5th round draft pick.  I just wanted to get you to take me through your draft experience and talk about how you were tracking the draft, how did you learn the Phillies drafted you and how did you celebrate?

I was at my grandmother's house with all my family and friends.  I knew I wasn't probably gonna go the first day, I knew I was gonna go anywhere from four to, anywhere to round 15. We were just kind of sitting there and waiting and we came down and I didn't really think I was gonna get picked that day, 'cause I was the last pick of that day, or whatever, on TV, and all of a sudden it kind of just happened. They called my name and my whole family was excited and kind of jumping around. Everyone was stoked. It was a great time. You can't really explain it. It was a great time. Everyone was full of excitement.


-  You had some solid output for a guy making his pro debut last year.  How did you feel about your performance with Williamsport in 2012?

In the beginning of the season, I was doing very, very well. I was just super hot and doing very well. And towards the middle and end, I struggled and kind of fell off of what I was originally doing, but I think the good thing about last season was seeing what my potential could be and just knowing that I can (play) at a high level and, if I can maintain that, I can post some really good numbers. It was just a good learning experience. You learn so many things in your first year, handling failure, playing every day and the grind. Last season was a (very) beneficial season for me. it may not have been the greatest season, but it was something that you learn from and there were so many things I took from that season.


- Who has been the biggest help to you within the Phils organization?

I think so far, probably my biggest help has been Andy Tracy. He was my manager last year and he's able to talk you through the ups and downs, you know, what he thought I was doing wrong with hitting wise or fielding wise. But, aside from that, if there was anything I ever needed, he was always there. And he always knew the right things to say, I feel like, at the time. He was just always (offering) positive encouragement and let's you know everything's going to be cool and what you're doing good and what you need to work on.


- A lot of this team played for Andy last year on the Williamsport team. Do you think that can be advantageous to the core of this team this year, having already gelled and worked together for the most part?

Oh, definitely. It's always nice having, basically, the same guys back. You're able to gel more as a team. It's like a college team. In college, the more years they're together, they're driven by more than just a selfish play-for-myself kind of thing, which can kind of happen in the minor leagues, when everybody's playing for the same job. You know, here it's like everyone's each other's buddy. And so, when everyone's playing for each other, it makes a bigger connection, with more stuff on the line, and I think that's what we have here, a huge team bond. Everyone likes each other and gels well.


- I know you're a California guy. What pro players did you look up to as a youngster?

When I was very, very young, I was always a big Derek Jeter fan. I wore the number 2 and I was a shortstop. As I got older, I was a big Troy Tulowitzki fan. Not too many California guys, for some reason I was always an out-of-state fan. But, those are the two guys I always enjoyed watching.


- Definitely a good pair. And I want to see if you've got another good pair of names to share. We spoke of you spending last season and all of spring training this year with this core group of guys. Who are the most entertaining guys on this Lakewood roster?

The most entertaining guys...I don't know. That's tough. I would say the biggest joker on the team, as in funny wise, is Nic Hanson. Him of Tyler Greene. One or the other. They're some goofballs.


- Okay, so let's get some examples. What are Nic and Tyler doing to be the comedians of the group?

Just the things that come out of their mouths. I don't know how to explain it. Nic will have some of the dumbest things you've ever heard come out of his mouth, just because he's a southern California guy. Greene, it's just his actions. He does some dumb stuff, action wise. It's hard to explain, just kind of the stuff that Nic says, his reasoning. He'll say stuff and the reasons behind why he thinks certain things are and they're the dumbest reasonings you'll ever hear.