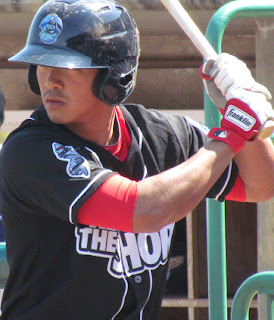 One of the more consistent bats in the Class A Lakewood lineup in the early going this season has been that of catcher Chace Numata.  The 20-year-old sported a .280 batting average entering the weekend through 14 games for the BlueClaws.

A 14th round draft pick in 2010 out of Pearl City High School in Hawaii, Numata sported a .224 batting average with two home runs and 30 RBI through 84 professional games entering the 2013 season.  Now, the 6-foot 175-pounder is leading a pitching staff that includes last year's top Phils draft pick Shane Watson and trying to help solidify an offense that is tied for the least amount of runs scored in the South Atlantic League.

Last week, I spoke with Chace about his transition from playing infield and pitching in high school, the hamate fracture that forced him to miss a great majority of the 2011 season, his progress in the minor leagues and plenty more.  Read ahead for that full interview.


- Chace, you seem to be producing pretty steadily on offense this year.  What is your comfort level like at the dish?

It's not bad.  I feel like, I think a lot, so this entire season I've been trying to not think so much and let the game come to me and slow things down.


- On the defensive side, you're not as consistent.  People would notice passed balls (seven this year) and things like that.  I know you've changed positions.  What can you tell me about how you're adjusting there?

You know, I'm still kind of learning, going from, in high school, just playing shortstop and pitching, to my first year in 2010 playing catcher.  I'm still learning.  There's still a lot of errors and things, passed balls, and I just feel like, when the coaches come in, my catching coach, he always knows how to fix it.  And I just need to kind of just stay with it.


- We're still in a new season here, so I imagine there are guys you're catching that are new to you. Are there certain guys you find more difficult to catch?

There are a few guys that are hard.  But they're all kind of the same in certain ways.  Velocity, yeah, certain pitchers are harder.  I have a harder time getting to balls, but other than that, they stay in the zone, so it's not too hard for me.  And they're starting off a little slow.  You know, it's a long season and we're all making our adjustments.


- You mentioned the coaches providing guidance and helping you out.  Which guys have been the most help to you?

Yeah, Ernie (Whitt) has been doing a great job keeping me calm, because, like I said earlier, I think a lot.  So, the little errors, the passed balls, I start thinking a lot about, "Maybe I should have got it!" When, sometimes, it was just a really bad pitch.  It's all these little tweaks that I just need to do and those little tweaks improve my game by a lot and I just need to be more consistent.


- How was the switch of position brought to you?  Was that something that was completely the idea of the Phillies, that it was best for you?

I had a couple teams look at me as a catcher, but the majority was pitching.  But, anything to be here.  I'll take it.


- I know a hamate injury kept you out of action for a pretty big stretch.  Just talk about that and perhaps how that has impacted where you are today.

The injury, I don't think it impacted where I am.  I feel like knowledge wise, toward baseball and stuff, I still have a lot more to learn.  A simple injury like that isn't gonna hold me back from being in Double-A or things like that.  I thought it was good for me, because I got to rehab with a couple big leaguers and learn.  Just watching the game and learning more, just watching, instead of constantly playing, I got to watch people make their adjustments and they make mistakes and I don't want to do the same.  So, I feel like I learn a lot better and get better by just watching tapes and watching my teammates play.


- And, of course, you're a Hawaiian guy.  I wanted to ask who you looked up to, as players, prior to turning pro?

A lot of guys.  I looked up to Shane Victorino, he was a Phillie before.  And Benny Agbayani, he played with the Mets.  Just a lot of these guys, like Troy Hanzawa, I watched him play in high school, you know, and I played against his brother too.  I've seen them all make it to the pro level and I figured, "Why not me?"


- Do you have any superstitions or game day routines that your stick by everyday?

I do, actually.  When I show up to the field.  I gotta have my lunch- peanut butter and jelly.  I listen to some reggae and right before the game I listen some house/techno/dub step, whatever it is.  And, I'll talk to my pitchers about what the game plan is and just kind of get them loose for the game.


- And lastly, what's your favorite baseball movie and why?

Man, I just saw 42, the Jackie Robinson movie, and I feel like a lot of baseball fans and baseball players should watch it.  It's a big impact.  If it wasn't for him, I wouldn't be here.


- Did you watch that with some teammates?