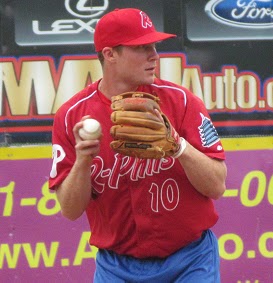 Phillies third base prospect Cody Asche is back once again to check in directly from spring training in Clearwater, FL.

A 4th round draft selection in 2011 out of the University of Nebraska, Asche has been a fast rising prospect since joining the Phillies organization. Last year, the 22-year-old, in his first full professional season, tallied a .324 batting average with 12 home runs, 72 RBI and 11 stolen bases in 130 combined games with Class A Advanced Clearwater and Double-A Reading. Asche followed that up with a .281/.343/.438 line with Peoria in the Arizona Fall League, then went 5-for-14 (.357 average) with two doubles in eight big league spring games this year.

In the latest edition of The Cody Chronicles, Asche speaks about being reassigned to minor league camp, Phils legend Mike Schmidt, what he took from his time with the big league team and plenty more.


Sharing his thoughts on being reassigned to minor league camp recently...

"It's something that, when you're in camp, it's gonna happen. You know, you just look around at who's there, the rosters, what roles everyone's going to be playing, and it was bound to happen. I know there's stuff I've gotta work on down in the minor leagues. I'm just grateful that I had the time I did over there, you know. I'm grateful that they gave me the chance to go up there and play. In my mind, I took full advantage of the opportunity and I'm happy with everything that went on over there and just gotta do my work over on the minor league side of things."

"That's exciting. It's real humbling when a guy like that notices your work and says good things about you. It just goes to show, really all the work that the coaches have helped me with and the work that I've put in with them, to make progress these past few years. I think the comparisons are nice and everything, but you gotta keep going, just keep going with it. You can never stop improving and it's kind of like a motivational kind of thing when someone like that sees what you, maybe, can be."


On his time spent working with Schmidt and impressions of him in camp...

"It wasn't like one-on-one, but he's around whenever we're doing our early work. You know, it's not the kind of thing where he'll make a comment every ground ball, but if he sees something, he'll let you know and he's always open for ideas, talking back and forth, or just bouncing different ideas around. He's there for questions, if you've got questions about anything, he's there for that, when we do fundamentals and stuff like that, he's in the dugout, talking about positioning and set ups and all kinds of stuff. He's very available. I got to talk to him a little bit and I'm very grateful to him for being around. Not only him, but (working with Ryne) Sandberg and Michael Young, that's been a real treat."


On if he would welcome switching positions, if the Phillies requested it, as he did when he moved from third to play second base in 2011 when he initially turned pro...

"I mean I've been in that situation before and I think I'd probably deal with it a little better. Going through that process once before...if it's something that's going to help me get to the big leagues, then I'm all for it. Right now, I'm a third baseman and I'm just here working and I'm trying to take advantage of every opportunity I can get."


On what was the biggest thing he took from his time spent with the big league club this spring...

"The thing I took most (out of my time with the big league club) is that I know big league baseball is what I want to do. You get a little taste of it, whether it be spring training or not, it's in your mind. It's always in front of you, when you go out to do your work, to get back up to that spot. It's totally different, you know. It's definitely what you want to do and it's definitely where you want to be playing. That little vision of what it's like, it kind of helps you out and gets you motivated to get you moving and keep improving."