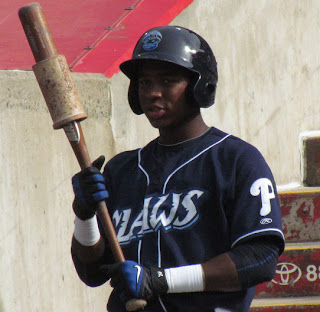 Powerful Dominican third baseman Maikel Franco has shown great progress during his time as a pro.  A highly touted player, Franco is an individual that Phils fans should be getting excited about as he climbs the developmental ladder.

Signed as an amateur free agent by the Phillies in 2010 at the age of 17, Franco would make his professional debut with the Gulf Coast League Phillies that same year.  He posted respectable numbers for his age, with a line of.222/.292/.330 in 51 games.

A year later, the righty hitting Franco began the season in extended spring training and later competed with the short-season Williamsport Crosscutters.  Franco looked great against New York-Penn League competition, posting two home runs, 28 RBI and a .274/.339/.389 line in 42 games before earning a promotion to Class A Lakewood.

In the South Atlantic League, at the age of 18, the baby-faced Franco struggled quite a bit. In 17 contests for the BlueClaws, Franco went 8-for-67 (.123 avg) and racked up an awful .349 OPS. The Phillies realized Franco was over-matched and that he was growing discouraged, so he was re-assigned back to Williamsport, where he finished the season by batting .333 with seven extra-base hits and 10 RBI over his final 13 games with the Crosscutters.

During his 2012 campaign back in Lakewood, the 6-foot-1 185-pounder showed much improvement and displayed considerable power throughout the season.  Franco began the season at somewhat of a slow pace, batting just .207 with six homers, 27 RBI and a .607 OPS before he heated things up after the South Atlantic League All-Star break.  In the second half of the season, Franco really showed what he can do, tallying a .346 average with eight home runs, 57 RBI, which were tops in the league during that stretch, and a .925 OPS.

Franco can drive the ball to all fields and has the highest offensive ceiling of any player on this year's countdown.  Trust in his hands, a firm routine and solid concentration helped the Azua native a great amount, according to Lakewood hitting coach Greg Legg.  Maturing as a player and the realization that utilizing all of his resources and his downtime to the fullest are things that certainly also helped Franco excel last year and will continue to be key for him, if he is to maximize his potential.

Speed is not a facet of Franco's game, as he has just three stolen bases in his three pro seasons.

Overall, Franco has an excellent makeup and projects to be a very good third baseman at the highest levels of the game.  Look for the youngster to begin the 2013 season with Class A Advanced Clearwater, where he'll play under former big league third baseman Chris Truby, who manages the Threshers.  If Franco continues to progress at a similar pace to what he showed last season, seeing time at the Double-A level this year may not be out of the question, although considering his age, the Phils are likely to have him endure a full season in the Florida State League.