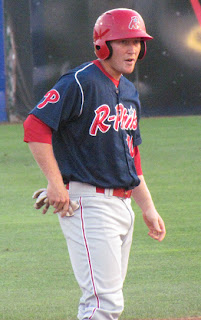 Fans, Phillies third base prospect Cody Asche is back once again to share his thoughts directly from inside big league spring training in Clearwater, FL.

Asche was a 4th round draft selection in 2011 out of the University of Nebraska. Since then, the 22-year-old has ascended quickly upward in the Phils' system. Last year, in his first full professional season, the Missouri native posted a .324 batting average with 12 home runs, 72 RBI and 11 stolen bases in 130 combined games with Class A Advanced Clearwater and Double-A Reading. Asche also followed that up with a .281/.343/.438 line with Peoria in the Arizona Fall League.

This year, Asche has landed in Major League spring training and is doing his best to make a lasting impression. Thus far in seven contests, the youngster is 3-for-10 with a double and two runs scored.

In the latest edition of The Cody Chronicles, Asche discusses his first start with the big league club, being ranked highly on prospect lists, his concerns over cut days and plenty more.


On being ranked among the top Phils' prospects...

"I've never really been one to delve into the whole prospect rankings area of baseball, but, you know, it's always nice to be regarded highly and thought highly of.  It's a thing that you've just got to take it for what it is.  It doesn't mean anything along the lines of playing time or anything like that.  You've just got to keep working hard.  You're always flattered when you hear or see good things about yourself, but you've got to be careful about always reading what is said about you, so I try not to look into stuff like that too much."


On if he's thinking about where he might begin the upcoming season...

"I have no idea what their plan is for me.  Right now, I'm just taking everything day by day and trying to make the most out of every day I have in Major League camp and I'll just see what happens from there.  I've been lucky to get some good assignments, starting last year in High A.  So, I'll just take whatever they give me and run with it.  I don't have a guess or anything like that."


On what his thoughts were upon learning that he was starting his first big league spring training game against the Yankees at home last week...

"My thoughts were, 'Let's go!  Just go play'.  You just get into that normal preparation mode that you just fall back on and your routine that you develop over all your experience playing baseball.  It just really comes natural to you to get in that mode and go play a game.  It was probably the most memorable thing so far for me in spring training."


On his level of concern when potential cuts are approaching...

"I think for each person, they think about it differently.  For me, you know, I mean last year I didn't know what to expect down there and I really just tried to take it one day at a time and just tried to earn a job.  And that's the way I went about spring training (last year).  I got down there early, to make sure I was ready to go and, so, whenever it came time for evaluations and putting rosters together, I'd be in conversations.  And that's really the plan of action I took this year too...I got down there early, make sure I'm ready and make sure I'm in a good position that nothing really devastating can happen.  And that's just my way of thinking.  And it's probably different for other people."


On if he's ever experienced any fun with hazing in the pro's or in college...

"Nothing too crazy.  Just small little locker room pranks like back in college we might have thrown a couple guy's shoes in a towel and wet a towel and got their clothes and put it in a freezer during practice, but I've never been on the receiving end of anything like that.  I've pretty much escaped that kind of stuff so far.  You know, it's one of those things that is fun and it's just part of the of camaraderie of teammates and everything.  You can't get mad at stuff like that."


On what video game he's best at and what else he's been doing during his free time this preseason...

"Well, NHL, that's the game I'm playing right now.  I feel like I'm getting worse down here.  It's just tough to keep up and I'm a little rusty right now.  Other than video games, we'll go try to find a little fishing hole and drop a couple lines and see if we can catch something.  The guys I live with, we try to stay pretty low key and relax whenever we have downtime and take full advantage of that."


On if he ever took part in playing fantasy baseball and what his draft advice would be for folks that participate in it...

Check back for more from Cody right here in the coming weeks!